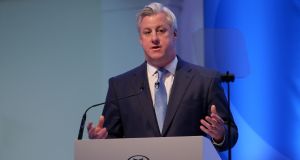 Cabinteely Football Club chairman and businessman Larry Bass has questioned if Roy Barrett was recommended to recruiters as independent chairman of the FAI by a senior official at Bank of Ireland, the association’s lender.

Mr Bass makes the claim in a four-page letter to Mr Barrett, who was appointed FAI chairman in January, where he raises issues around corporate governance and appointments at the FAI.

A number of sources have told The Irish Times that the recommendation of Mr Barrett, who heads Goodbody Stockbrokers, came from Bank of Ireland chairman Patrick Kennedy.

In his letter Mr Bass, who is a member of the FAI’s finance committee, states that such a recommendation would represent a conflict of interest. The bank was owed more than €28 million by the FAI at the time and the association was in dire financial straits.

“In governance terms, how is it that this [Bank of Ireland] person appears to have become a de facto nominations committee member?” he asks in his letter. “How is it that that person has a role in recommending you? Most importantly, given your first and most important job was to renegotiate the Bank of Ireland debt, did this not create a basic conflict of interest for you?”

Mr Bass’s letter does not name the Bank of Ireland official. Amrop, an executive search company, conducted the recruitment process for the FAI.

An FAI spokesperson said: “Amrop were engaged to source suitable candidates for the role of independent chairperson of the FAI. Roy Barrett was identified by Amrop, recommended by them to the nominations committee of the FAI and his appointment was approved by the board.”

In late January, the FAI secured a €30 million rescue package following negotiations with the Government, Bank of Ireland and Uefa. At the time Bank of Ireland did not disclose the details around its involvement with the package but it is understood there was no writedown of its debt involved.

In March, the council of the FAI voted to support the banking measures as part of its rescue deal. This was to release €14 million in loans and allow the FAI to pay a substantial portion of its outstanding debts to creditors. The FAI’s debt on the Aviva stadium was stretched out to 2030 and there is a provision for a further €10 million to be borrowed.

It is understood that Uefa has guaranteed the additional borrowings with the bank. According to sources, Mr Barrett was not on the original list of prospective appointees as chairman, with businessman Maurice Pratt initially the preferred choice for the role.