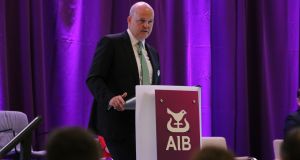 AIB has begun paying refunds to 5,900 customers who were wrongly denied a tracker mortgage about a decade ago. All of the refunds are due to be paid out by the end of this month.

According to Brendan Burgess, founder of online consumer forum Askaboutmoney. com, refunds of between €10,000 and €15,000 on average will be paid out by the bank.

In addition, the customers will benefit from a reduction in the balance on their mortgage – 12 per cent of the balance when their fixed rate finished about 10 years ago.

Mr Burgess said AIB has also agreed that anyone in this group who is on a fixed rate can break out without having to pay a penalty fee, which would normally be applied.

“As fixed rates have been falling, it’s very likely that most people could switch to a lower rate by breaking now,” said Mr Burgess in a note issued on Monday.

Speaking to The Irish Times about the refunds, Mr Burgess said: “These are life changing figures for many of the people involved. They will have lower mortgage repayments and a lump of cash that they were not expecting. With a lower loan-to-value it might be a good time to switch their mortgage to another lender with a lower mortgage rate.”

In a statement, AIB said: “As communicated in February we took a provision to cover the application of a Financial Services and Pensions Ombudsman decision to a wider group of AIB customers – about 5,900. In line with the FSPO decision we are writing down 12 per cent of the capital balance at the time the customers’ fixed rate period ended and are refunding the interest charged on that capital amount.

“The manner in which the interest rate has been calculated has been independently reviewed by a third party. Customers began receiving their payments today.”

In February, AIB announced it was taking an additional €300 million provision to deal with tracker-mortgage cases, after the ombudsman issued a preliminary decision on an individual case which has a bearing on the 5,900 customers who were denied a cheap mortgage.

Previously, AIB had only offered this group €1,615 each for a “service failure” in late 2017. While the bank has admitted it denied this group the option of moving to a mortgage tracking the European Central Bank’s main rate more than a decade ago, it has consistently argued that the prevailing tracker rate at the time would have been 7.9 per cent.

The AIB independent appeals panel had rejected all related appeals cases put forward by individuals from the affected group, according to Mr Burgess, who had co-ordinated a campaign around the issue.

“The board recognises it is in the interests of the group, our customers and our other stakeholders to bring this matter to a resolution and discussions are ongoing with the Central Bank of Ireland with regard to potential appropriate treatment of this group of customers,” said AIB in a statement in February.