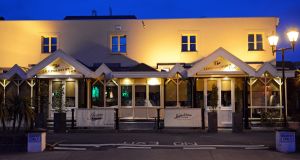 The Leopardstown Inn was one of four pubs that took the case against FBD. Filephotograph: Eric Luke

Business groups have welcomed the High Court’s decision on Friday that four pub groups are entitled to compensation from insurer FBD under business-interruption policies triggered by Covid-19 restrictions.

The insurer has set aside €30 million in provisions for potential liabilities resulting from the case. The court will decide on the issue of quantifying losses suffered by publicans at a later date. The case is due back in court on February 17th.

Shares in FBD did not immediately react to the ruling on the Dublin stock exchange. However, they were down 1.4 per cent at €6.98 in midday trading.

“It was grossly unfair that these family businesses had to go to the High Court against the might of a publicly-quoted insurer to have their claims validated,” he said.

“We are now calling on insurers to quickly review their business-interruption policies in light of today’s decision and to promptly pay all valid claims.”

Padraig Cribben, director of the Alliance for Insurance Reform and chief executive of the Vintners’ Federation of Ireland, said: “We welcome this outcome and call on all insurers underwriting in Ireland to move urgently now to settle all valid business-interruption claims arising from Covid-19, to review all claims already declined and to inform all policyholders who have a valid claim that this is the case.”

The language in FBD’s pub policy, dating back three decades, states that it covers losses where a premises is closed under the orders of a local or government authority in the event of “outbreaks of contagious or infectious diseases on the premises or within 25 miles of the same”. It does not list diseases.

In a lengthy and detailed judgment delivered on Friday, Mr Justice Denis McDonald disagreed with FBD’s interpretation of its policy and said cover is not lost where the closure is prompted by nationwide outbreaks of disease provided there is an outbreak within the 25-mile radius and that outbreak is one of the causes of the closure.

Lemon & Duke managing director Noel Anderson said the case should never have ended up in court.

“I specifically had taken out a business-interruption policy to protect us against Covid-19 and its potential impact on our business. As the court heard during the trial, this was acknowledged in writing by FBD,” Mr Anderson said.

“Yet in order to have our claim settled we were forced to go through 10 months of deep financial uncertainty, significant additional risk in taking this action, as well as extensive stress and strain to arrive at an outcome which should have been clear from the outset.”

Chris Kelly, chief executive of the group behind Sinnotts Bar in central Dublin, said that despite his business being a long-term customer of FBD, paying a premium of more than €250,000 per year, the insurer “attempted to renege on its legal obligation to honour our claim”.

“These are extraordinarily difficult times for publicans. FBD’s thwarted attempt to deny cover to our business and several hundred other publicans across the country has only compounded our anguish at the worst possible time,” he said.

“FBD has failed to put its customers first throughout this process. By rejecting our claim and by putting its own financial gain ahead of its responsibility to customers, FBD forced us to pursue a three-week High Court case at the very time we were and are trying to save our business,” Kelly said.