Boost for SME sector as lending jumps 32% in first quarter 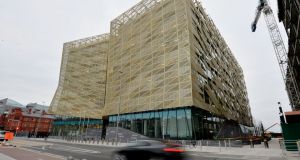 New lending to non-financial and non-real estate SMEs jumped by 32 per cent in the first quarter of 2017 compared with the same period last year, according to new figures from the Central Bank.

The regulator said in its SME Market Report that €3.6 billion had been extended to small businesses during the period, which is up significantly from the €2 billion-€2.5 billion range that existed from 2010 to 2013.

The growth in new lending was “broad-based” across sectors of the economy, the bank said, with manufacturing and the wholesale and retail sectors experiencing particularly strong growth.

Outstanding credit to SMEs continued to contract during the quarter, with the stock of SME credit declining to €16.6 billion, down 8.2 per cent from the previous year.

The SME lending market remains “highly concentrated” as the three main lenders currently have a market share of 82 per cent in terms of new lending.

The proportion of SMEs seeking loans is down to one in five from twice that figure in March 2013, according to a Department of Finance survey.

Investment and working capital are the most common reasons cited by Irish SMEs for loan applications. The share of Irish loan applications for investment reasons has grown from 36 to 47 per cent over the period September 2016-March 2017.

The rejection rate on loan applications has increased from 11 to 13 per cent over the year to March 2017. Medium-sized firms have continued to experience a fall in rejection rates, while small and micro firms are experiencing increases.

Central Bank loan-level data for December 2016 show that 18.7 per cent of SME loans are in default.

SME default rates are highest in the construction and hotels and restaurants sectors, and lowest in the manufacturing, primary and other community, social and personal sectors.

Regionally, default rates for SMEs are highest in the west and mid-west and lowest in the south-west region.

The average interest rate on loans under €250,000 is currently 5 per cent in the Republic, down from late 2016 but remaining significantly higher than in comparable country groups. The premium paid on small versus large loans also remains substantially higher.

1 MSD buys Takeda biologics plant in Dunboyne
2 ‘Saudi Arabia is where the opportunities will happen in future’
3 State’s biggest landlord records 30% rise in rental income
4 Facebook agrees Irish wind-farm deal with Brookfield in Tipperary
5 What will the office market look like after the great remote working experiment?
6 Data centres will force State to choose between climate and investment
7 Trump’s TikTok move may have far-reaching consequences
8 Irish Times Business Awards: Local Enterprise of the Year nominees
9 Identigen founders make €12m each from sale of company
10 Why the Covid-19 crisis may push up house prices
Real news has value SUBSCRIBE