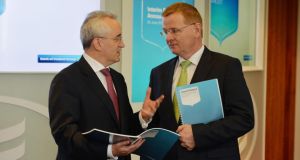 Bank of Ireland has signalled an interest in buying wealth-management assets and more loan books as the group begins setting aside money to cover a return to dividends next year for the first time since the onset of the financial crisis.

Last December, the bank bought Dublin-based Covestone Asset Management, with €100 million of such assets, in an effort to boost its non-interest income.

“We’re into an Irish economy where wealth creation will become more important over the next couple of years,” Mr McLoughlin said.

He said that the group, which sought to slow contraction of its loan book in the past two years by acquiring seven portfolios of mortgage and small-business loans, “would always continue to be in the market for good-quality performing assets as opportunities emerge”.

He indicated the bank was circling a €2 billion portfolio of Irish owner-occupier and buy-to-let loans that Danske Bank is selling as the Danish lender runs down its retail business. “That’s a very interesting opportunity in the market place,” he said.

Earlier on Friday, chief financial officer Andrew Keating signalled the bank will pay 20 per cent of full-year profit to shareholders as it reinstates dividends for the first time since 2008.

The State’s largest bank by assets set aside €70 million, or almost 19 per cent of first-half net income, for a likely dividend early next year.

The bank decided in February to hold off making shareholder payments for a further 12 months, given volatility in the bank’s pension scheme, where the deficit doubled in the first nine months of the year to €1.45 billion before shrinking to €450 million by December. That deficit widened again to €500 million in June.

The group ultimately plans to return to paying half of its “sustainable earnings” to investors.

The bank’s interim report showed that impaired loans fell by €800 million to €5.4 billion during the six months as the economy improved and the bank continued to restructure troubled loans.

Underlying profit for first half came to €480 million, beating Davy analysts’ estimate by 17 per cent. However, the figure is down 14.3 per cent on the same period in 2016, when the result was flattered by €157 million of one-off gains from the sale of the bank’s stake in Visa Europe and sovereign bond investments.

The group’s outgoing chief executive, Richie Boucher, decided not to be involved in the presentation of the results to analysts and reporters on Friday. Mr Boucher, who is set to retire in October after leading the group since 2009, did not want his imminent departure to distract from the results.

He is set to be succeeded on October 2nd by HSBC executive Francesca McDonagh.

The bank’s net interest margin, the difference between the average rate at which it funds itself and lends to customers, rose by 0.05 percentage points year on year to 2.32 per cent in the second half of last year.

The bank’s total loans continued to decline, falling to €80.1 billion in June from €82.4 billion in December. However, the group said its “core loan books” increased by €500 million.

The bank’s common equity Tier 1 capital (CET1) ratio, a key gauge of a lender’s reserves which can be used to absorb surprise losses, rose to 12.5 per cent in June from 12 per cent in March, including the deduction of money set aside for potential dividends.

The bank’s “asset quality remains the best in the Irish market by some distance,” Investec analyst Owen Callan said in a note to clients. “Given the breathing space now available on CET1, the solid balance sheet and strong earnings, the initiation of a dividend payout in early 2018 remains firmly on track,” he added.