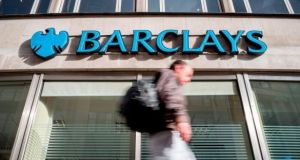 The bank reports its full-year results in February

Barclays is embarking on a plan to cut about 100 senior jobs, mostly in trading roles across its corporate and investment bank, as the British lender seeks to rein in costs.

The bank has started trimming mainly managing director and director positions in London and Asian financial hubs, according to people familiar with the matter, who asked not to be identified as the details aren’t public.

A spokeswoman for Barclays in London declined to comment on the cuts, which are among the first to be implemented by a major investment bank in 2020. Last year saw several European lenders reshape their securities units, eliminating thousands of roles amid increasing competition from US peers and a lacklustre home market.

Jonathan Kitei, head of securitised product sales for Americas, Tim Johnston, head of EMEA cash high-touch trading and sales, and Anindya Das Gupta, head of treasury in India, are leaving the bank as part of the cuts, people familiar with the matter said. All three declined to comment.

About a dozen positions in Asia have been hit, though the cuts won’t result in a retreat from any business or market in the region, one of the people said.

The bank reports its full-year results in February. The corporate and investment bank outperformed Wall Street peers in the third quarter, as revenue from fixed-income and equities trading advanced. chief executive Jes Staley, who has clamped down on expenses as he seeks to reach profitability targets, nevertheless said in October that “the outlook for next year is unquestionably more challenging now than it appeared a year ago.”

Last year, he said Barclays cut 3,000 jobs in the second quarter. In the bank’s 2018 annual report, Barclays said global headcount was more than 83,000.

Banks announced almost 80,000 job cuts last year, the most since 2015, with the vast majority of that sum in Europe. Societe Generale and Deutsche Bank are among other European lenders who have recently cut headcount.

1 Ryanair and Aer Lingus monitor impact of conronavirus on travel to Italy
2 Bank leaked my loan request to family who tried to rip me off
3 Boris Johnson's new immigration regime will damage much more than industry
4 Mastercard to create 1,200 new jobs by expanding base in Dublin
5 Garda mobile contract win causes concern over Eir’s use of Huawei kit
6 How can I view my dead brother’s will if I’m not the executor?
7 Google completes purchase of Treasury Building for €120m
8 Billionaire Zara founder and German funds vie for prime Dublin offices
9 Nothing beats practice in bid to master public speaking
10 AIB lines up former HSBC executive McDonagh as chairman
Real news has value SUBSCRIBE