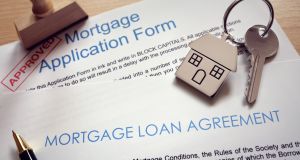 Included in the BPFI’s suggestions is a change to insolvency legislation so that a co-debtor could be pursued by a lender if they’re not co-operating. Photograph: iStock

About one in 10 mortgage arrears cases involve borrowers who are separated, the Banking and Payments Federation Ireland (BPFI) estimated as it called for the State to introduce measures to help those borrowers with their arrears.

BPFI analysis indicates that lenders treat borrowers in different ways, ranging from considering each party to be a single borrower with repayment capacity assessed on an individual basis but with both borrowers remaining liable for the outstanding debt, to offering short-term alternative repayment arrangements if only one party is engaging.

But because of the complexities of these cases, where often only one party does engage, the BPFI has suggested several solutions that can be applied wholesale, rather than on a case-by-case basis.

In its code of conduct for dealing with mortgage arrears, which sets out how lenders should deal with borrowers, the Central Bank of Ireland advised: “In the case of joint borrowers who notify the lender in writing that they have separated or divorced, the lender should treat each borrower as a single borrower under this code.”

But because mortgage agreements would have been initially signed by two parties, the treatment of separated borrowers is more challenging.

“Lenders are doing all they can to accommodate mortgage arrears cases involving separated borrowers. But there is only so much they can do on their own, given the complexities involved,” said Brian Hayes, chief executive of the BPFI.

“We all wish to see the outstanding level of mortgage arrears reduced as effectively and quickly as possible which is why we will be hoping for a constructive response,” he said, adding that he has written to relevant parties about the matter including the Central Bank and the Department of Finance.

1 Opioid executive admits to ‘no morals’ ahead of prison term
2 Does Budget 2020 price UK car imports out of the market?
3 American YouTubers embrace the crisp sandwich
4 South Dublin Credit Union members urged to borrow more to ensure survival
5 ‘If you don’t like challenges, you should not be in the airline business’
6 Election proposals may make the housing crisis worse
7 Overlooking the virtue of patience in business comes at a cost
8 Farmer seeks to challenge €3.6bn Intel plan in High Court
9 Are there annual limits on inheritances or gifts to a child?
10 Dubliners spend 55% of take-home pay on rent
Real news has value SUBSCRIBE