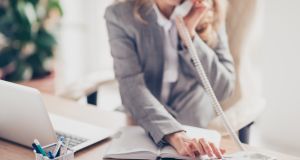 Cropped closeup photo of clever smart professional polite secretary in grey formal suit is calling to her boss, she is sitting at the table in office

Banks in Ireland have started to listen to calls from regulators to improve diversity at senior levels, according to research from the Central Bank.

The Central Bank received 4,500 applications for approval to occupy top roles within related firms in 2018, up 50 per cent on the previous period, mainly as overseas firms prepared to move more activities to Dublin ahead of Brexit.

Some 31 per cent of applications from banks were for women to be approved, up from 25 per cent in 2017, the regulator said. The pick-up was even more pronounced in applications for board positions, with women accounting for 36 per cent of such submissions, up from 23 per cent a year earlier.

Across the wider financial services industry, 24 per cent of applicants for approval under fitness and probity rules were female, up 2 per cent from a year earlier and 8 per cent from 2012.

“This type of groupthink contributed to the depth of the financial crisis internationally and in Ireland, and contributed to many of the conduct scandals that have subsequently emerged.”

Mr Sibley warned the State’s banks last August that the regulator may impose gender-diversity targets if they did not move to boost the percentage of women at senior executive and management levels.

A Central Bank assessment of diversity in the State’s banks found that companies lacked ambition in this matter, particularly as “groupthink” was a contributing factor to the financial crisis. The analysis was published in July alongside a behaviour and culture review that was prompted by the tracker-mortgage scandal.