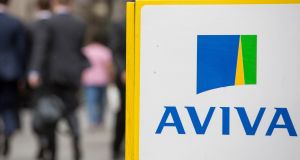 Aviva Ireland’s operating profits rose by 15 per cent last year to €113 million, driven by its life business following the purchase of Friends First in the middle of last year.

The company, which employs 1,600 people in Dublin, Galway and Cork, said that its general insurance division’s net written premiums rose by 2 per cent to €485 million. Operating profits increased by 4 per cent to €63 million, though Aviva Ireland said that further reforms are needed to reduce the cost of personal injury claims in the country.

The unit’s combined operating ratio – costs and claims expenses as a proportion of premium income – was flat at 91.5 per cent. A ratio below 100 per cent means an insurer is writing business at a profit.

Aviva Ireland’s €130 million purchase of Friends First from Dutch group Achmea last June boosted the company’s share of the State’s life and pensions market to about 15 per cent – roughly equating to its slice of the general insurance market.

The deal helped boost operating profits in the life insurance division by 31 per cent to €50 million, as the net present value of new business premiums increased by 14 per cent to €1.37 billion.

“The integration of the two businesses is progressing well,” said Aviva Ireland chief executive John Quinlan, adding that the company supports planned Government measures, published by the Department of Employment Affairs and Social Protection last summer, to make sure employees are automatically enrolled in a pension scheme.

Meanwhile, Aviva Ireland last month completed the setting up of an Irish legal entity for general insurance and the authorisation process for both its life and general insurance businesses to be regulated in Ireland in order to ensure smooth trading following Brexit.

On February 14th, A London court approved the transfer of about €9 billion of assets from the company’s UK parent, Aviva plc, to the Irish business.

Markets show ‘once in 48 years’ show of strength

Pensions row fix could threaten future of State payment, actuaries warn 05:15
Will the next decade be a better one for value investors? 05:15
No quick-fix solution to mortgage arrears 05:05
Conversation about BBC’s future will sound familiar to RTÉ watchers 05:00
Markets show ‘once in 48 years’ show of strength 05:00