Bank of Ireland launch of Apple Pay may drift to 2020

Other banks already offer payment via smartphone or smartwatch 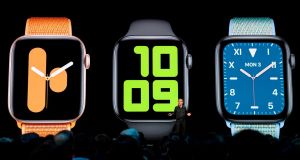 Bank of Ireland, which is currently in the middle of a €1.15 billion overhaul of its IT systems, may see its launch of Apple Pay and Google Pay drift out to next year.

A spokesman for the bank has confirmed that phone payments technology will not be part of the bank’s new mobile app when it is launched later this year.

However, the bank had not put a timeframe on phone or smartwatch payments being available, he said. It was reported elsewhere on Wednesday that the bank, which is behind rivals AIB, Ulster Bank and KBC in launching Apple Pay and Google Pay, had originally to introduce such technology this year.

“We recently completed the largest customer migration in the history of the bank, moving 2.1 million customers to a new platform for debit cards and ATM transactions,” the spokesman said. “This gives us and our customers more stable systems for hundreds of millions of transactions each year.”

The spokesman said that the first version of the new app that will be launched in the fourth quarter of the year “is the foundation from which we will deliver enhanced customer experiences through regular update”.