Job cuts at investment banks near 30,000 as outlook deteriorates 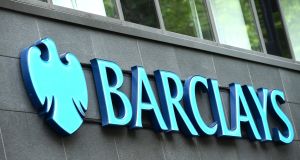 Earlier this month, Barclays said that it had cut 3,000 jobs, or almost 4 per cent of its total workforce, in the second quarter. Photograph: Ian West/PA Wire

Global investment banks are shedding tens of thousands of jobs as falling interest rates, weak trading volumes and the march of automation create a brutal summer for the sector.

Almost 30,000 lay-offs have been announced since April at banks including HSBC, Barclays, Société Générale, Citigroup and Deutsche Bank. Most of the cuts have come in Europe, with Deutsche accounting for more than half the total, while trading desks have been hit hardest.

In New York City, jobs in commodity and securities trading fell by 2 per cent in June from the year before, a loss of about 2,800 positions, according to the New York Department of Labor.

Bank executives are under pressure from investors to cut costs and protect profits. Since long-term US interest rates began to fall in November, the KBW index of US bank shares has fallen 5 per cent, while the S&P 500 has risen by 6 per cent. The Stoxx index tracking European banks has lost 16 per cent since November to hit a three-year low.

While the reasons given vary from bank to bank, there are signs that deeper trends, such as the increasing pile of debt paying negative interest rates, are forcing the sector to shrink.

“Clearly, the outlook for investment banking revenue is getting tougher,” said Andrew Lowe, a banks analyst at Berenberg. “It’s hard to make money as an investment bank in a zero or negative rates environment.”

Automated trading, passive investment strategies and consolidation of volumes by the biggest players have drained much of the profit from the trading of stocks and many kinds of futures.

Automation is also making inroads into more complex derivatives, commodities and bond trading, too. In 2018, the total revenues of the top dozen global banks from fixed income, currency and commodities trading dropped to 2006 levels, according to Coalition, a banking research firm.

Investment banks “are facing a structural change in their revenue profile,” said Ed Firth of Keefe, Bruyette & Woods. “The [banks]that will win will have the volumes, systems and computer power. How many people do you need?”

Banks are also bracing for the so-called “Basel IV” rules, which will increase banks’ capital requirements, to take effect in 2022. The increased capital required will make trading less profitable for many banks.

At the banks that have formally announced cuts so far, the lay-offs amount to roughly 6 per cent of the total workforce.

Earlier this month, Barclays said that it had cut 3,000 jobs, or almost 4 per cent of its total workforce, in the second quarter.

Citigroup said last month it would cut “hundreds” of jobs in its markets operations. A person close to the matter described the lay-offs as a “function of market dynamics”.

The most recent cuts add to the 18,000 job losses at Deutsche, which announced a radical overhaul last month that will reduce the headcount at Germany’s largest lender by almost a fifth. The changes will all but eliminate equity trading and cut deeply into the foreign exchange and bond desks.

In April, when Société Générale announced that it would shed 1,600 jobs, mostly investment bank positions, it said that it was retrenching to “areas of strength”.– Copyright The Financial Times Limited 2019.