Arachas plans to double size in five years after takeover 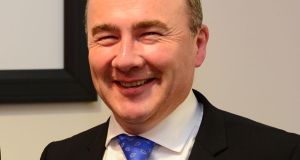 Arachas chief executive of Conor Brennan said the company was looking to double the amount of business written in Ireland over the next five years by a combination of organic growth and acquisitions. Photograph: Dara Mac Dónaill

Arachas, the acquisitive Dublin-based insurance broker focused on small businesses, plans to double the amount of its coverage it writes over the next five years, after its imminent takeover for about €250 million bsy a UK brokerage group.

It was confirmed on Monday that they were rolling Arachas into a UK insurance brokerage group that they control, called Ardonagh. The news was contained in a refinancing announcement by Ardonagh, home to a number of well-known UK brokerages, including Bishopsgate, Towergate and Carole Nash, and led by Westmeath native David Ross.

Arachas, whose name is Irish for insurance, was established a decade and a half ago through the merger of Cork-based broker Tyrrell Coakley with two Dublin-based peers, Hodgins Percival and Slattery Jermyn.

Sovereign backed a management buyout of Arachas in 2017, with the business moving soon after to purchase Kidd Insurances, Capital Cover Group and Clover Centre Insurance. Insurance executive Conor Brennan left Zurich Insurance in early 2018 to take over as chief executive of Arachas.

“A big attraction of dealing with Madison Dearborn and HPS was the possibility of being included in the Ardonagh Group, ” Mr Brennan told The Irish Times on Tuesday, noting that Ardonagh has also been an acquisitive business and had a similar culture. He declined to comment on the value of the deal.

Arachas recently completed the purchase of Dublin-based broker O’Driscoll O’Neil, which specialises in providing coverage for sporting and cultural events, for an undisclosed sum.

“We are essentially looking to double the amount of business written here over the next five years by a combination of organic growth and acquisitions,” Mr Brennan said, adding that the company was working on a pipeline of potential deals.

It is believed that the annualised level of insurance business written by Arachas on behalf of customers, ranging from plumbers to sporting organisations, currently amounts to about €270 million.

Ardonagh announced on Monday that it was refinancing its balance sheet through a £1.58 billion (€1.75 billion) loan facility from a group of lenders and the sale of $500 million (€441 million) of so-called payment-in-kind notes, a type of debt where interest payments can be rolled up and added to the principal.

Some of the proceeds are being used to buy Arachas as well as UK brokers Bravo and Bennett’s Motorcycling Services.

Ardonagh has also been surrounded by speculation of a potential initial public offering in recent years.

Consolidation is continuing apace among top-tier global corporate insurance brokers. UK-based insurance broker Aon announced in March that it plans to buy Willis Towers Watson in an all-stock transaction worth about $30 billion.