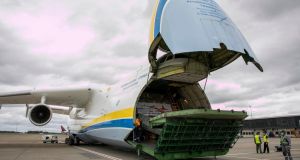 The world’s largest aircraft, the Antonov 225, touches down at Shannon Airport with Ireland’s largest consignment of PPE in a single flight. Photograph: Arthur Ellis

The surge in demand for personal protective equipment (PPE) as a result of the Covid-19 pandemic has delivered a boon for a five-year-old Irish fintech.

InvoiceFair, a Dublin-based trading system where companies with approved invoices or purchase orders from blue-chip or State companies raise funds to complete the deals, has facilitated the funding of more than €30 million of PPE orders in recent months, according to its chief executive, Helen Cahill.

That includes the €12 million to €14 million of financing for isolation gowns from China that landed at Shannon Airport last week on the world’s largest aircraft, the six-engine Antonov An-225 Mriya.

Ms Cahill declined to comment on the identity of the company behind the order, which had traded its contract on InvoiceFair to complete the purchase and deliver the consignment to the Health Service Executive (HSE).

“InvoiceFair’s strength is structuring working capital solutions for SMEs, across all sectors, centred around them selling receivables, or approved invoices, and future receivables, such as purchase orders, contracts or recurring revenue, to a pool of institutional funders,” said Ms Cahill, adding that the firm facilitates the sale of receivables and not the extension of credit.

More than €600 million of receivables have been traded on the platform since it was set up in 2015 by Ms Cahill and Philip Hickey.

Receivables are traded daily on InvoiceFair’s platform between 9am and 11am, with regulated institutional funds, mainly based in the UK, the buyers of about 80 per cent of those traded. Family office and professional investors make up the remainder, according to Ms Cahill.

Funders using the InvoiceFair system will finance up to 90 per cent of the value of an approved invoice or purchase order. The total cost for the company with the order ranges between 1 per cent and 3 per cent, depending on the size of the deal. That includes a trading fee and the discount funders apply to a receivable to purchase a contract.

“There is a very limited range of funding solutions specifically targeting the working capital requirements of Ireland’s SMEs in 2020. The traditional lending model has a myriad of restrictions including facility limits, customer concentration limits, territory limits and often a requirement for credit insurance, which is an additional cost,” she said.

“Our market-based funding model puts control directly into the hands of the SME and enables them to leverage on their receivables when they need to release working capital.”

1 Will your boss let you work long-term from home – or from abroad?
2 Plans for €2bn Dart expansion lure Bombardier to Dublin
3 Press Up Entertainment: Who is behind it and what do they do?
4 McGuinness faces Brexit and Covid grilling at parliamentary hearing
5 Virgin Media unveils new entertainment platform
6 Press Up’s asset diversity is its Achilles’ heel
7 Oil price slump weighs on global markets
8 Ryanair signals possible closure of Cork and Shannon airport bases
9 Google tells workers to return to country where they are employed
10 Whistleblower warned EY of Wirecard fraud four years before collapse
Real news has value SUBSCRIBE