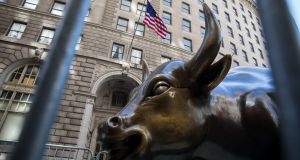 European shares rose to their highest level in two weeks on Tuesday, with banks among the main gainers in Dublin, as investors piled into stocks that are highly exposed to the economic cycle after data showed that business activity across the euro zone was rebounding faster than expected from the Covid-19-driven slump.

The pan-European Stoxx 600 index added 1.3 per cent, while the Iseq index in Dublin gained 0.7 per cent to 6,177.33. Still, the Irish market remains 14 per cent lower than where it started the year.

A keenly-followed gauge of business activity, the IHS Market flash composite purchasing managers index (PMI) for the euro zone, rose to 47.5 per cent in June from 31.9 a month earlier, according to data released on Tuesday, as countries continued to ease coronavirus restrictions.

Still, a reading below 50 indicates that the majority of businesses reported a contraction in activity compared to the previous month.

Banking stocks, which have been among the worst affected by the economic shock, were in demand, with AIB rising 5.9 per cent to €1.13 and Bank of Ireland jumping 8.3 per cent to €1.86.

Forecourt retailer Applegreen, a stock that gives investors a rare direct exposure to Irish retailing, advanced 2.7 per cent to €3.82.

Malin, which invests in life sciences businesses, added 3.5 per cent to €4.18 as investors continued to cheer news on Monday that Poseida Therapeutics, a company in which it has a significant stake, has filed for a potential initial public offering (IPO) on the Nasdaq exchange.

Bucking the trend, cardboard boxmaker Smurfit Kappa, which had been outperforming the Irish market in recent times as it benefitted from a boom in e-commerce, declined 0.3 per cent to €29.32.

The blue-chip FTSE 100 closed up 1.2 per cent, boosted by financial, energy and mining stocks.

However, Hikma Pharmaceuticals slumped 5.6 per cent on news that Boehringer Ingelheim, a major shareholder in the drugmaker, was selling most of its nearly £1 billion (€1.1 billion) stake.

Pharma and chemicals giant Bayer gained 5.8 per cent after reports that the company is set to reach a settlement this week with US plaintiffs that claim its glyphosate-based weedkillers cause cancer.

Wall Street’s three major indices were higher in early afternoon trading as improving economic data and the prospect of more stimulus bolstered hopes of a swift recovery, while a jump in technology shares powered the Nasdaq to another record high.

White House advisor Larry Kudlow said tax rebates and direct mail cheques are on the table in the next coronavirus relief bill.

The Nasdaq hit a fifth record high this month with Apple providing the biggest boost after at least three brokerages raised their price targets, a day after the iPhone maker said it would use its own chips for Mac computers.

Nike rose as brokerages raised their price targets ahead of quarterly results on Thursday.

Boeing’s top supplier Spirit AeroSystems slipped after it said it was seeking relief from lenders as its finances were stretched by the Covid-19 pandemic and a 737 MAX production halt. – Additional reporting: Reuters

1 In this strangest of recessions, what happens next for Ireland?
2 Michael O’Leary is the boss you want to lead an airline out of crisis
3 Bank of Ireland sees about 2,000 staff apply for voluntary redundancy
4 Estée Lauder staff at Dublin airport plan further strike action
5 Best Covid-19 ‘influencers’ will avoid hectoring
6 Should I switch bank now with Ulster Bank at risk of closing?
7 Fortnite owner signs multimillion deal to buy Irish ‘kidtech’ firm
8 The wealth of the Irish – how do your assets match up?
9 Ireland’s Covid-19 economy in five graphs
10 EY Entrepreneur of the Year: nominee profiles
Real news has value SUBSCRIBE