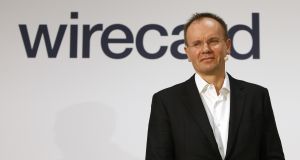 Wirecard chief executive Markus Braun has been released on €5 million bail after his arrest in connection with a suspected fraud of nearly €2 billion at the Bavarian digital payments company.

Prosecutors in Munich confirmed on Tuesday that Mr Braun was arrested on suspicion of using fake transactions to inflate his company’s balance sheet, possibly with others, to make the company he has headed since 2002 more attractive to customers and investors.

Last week auditors EY refused to sign off on the company accounts until the €1.9 billion – around a quarter of the company’s assets – could be located. On Monday, Wirecard, which operates digital payments between retailers and customers, admitted that the missing assets never existed.

“In an initial conversation, he promised his co-operation,” said Anne Leiding, a spokeswoman for Munich investigators, promising an “open-ended investigation”.

Among the charges investigators are considering filing are “incorrect information” in the Wirecard balance sheet, as well as market manipulation and fraud.

The arrest of Mr Braun, once a darling of the local fintech scene before his resignation last Friday, has electrified managers and media alike in Germany. Ongoing confusion over Wirecard’s actual financial position – how much is real and how much illusion – has raised questions about the efficacy of BaFin, the German financial regulator.

Fears are growing that further Wirecard revelations could compound Germany’s gloomy economic outlook: on Tuesday, leading economists forecast that Europe’s largest economy will shrink by 6.5 per cent this year – a post-war record.

Meanwhile, leading German traders that use Wirecard – discount retailer Aldi, Germany’s big three mobile operators and Sky Deutschland – are said to be reviewing their contracts with the firm. Some are demanding daily transfer of transaction totals to reduce their exposure in the case of a possible collapse.

Wirecard was founded in 1999 and employs almost 6,000 people in 26 countries, including in Ireland. Mr Braun, its Austrian-born chief executive since 2002 as well as chief technology officer, holds 7 per cent of the company stock and is the largest shareholder.

Wirecard’s managers are locked in negotiations with banks and other creditors to avoid a collapse of the company after a search for missing money ended in the Philippines. When that country’s central bank denied the €1.9 billion had entered the country’s financial system, Wirecard shares crashed 85 per cent on Monday.

The fraud investigation has rattled German politicians. Federal finance minister Olaf Scholz has described the scandal as “extremely worrying” and said it raises “critical questions” over management and oversight.

“Auditors and supervisory bodies do not seem to have been effective here,” said Mr Scholz.

Germany’s financial regulator Felix Hufeld described the Wirecard scandal as a “disgrace” for Germany. “We are in the middle of the most outrageous situation in which I have ever seen a Dax firm,” he said, admitting his own body had failed to do its job with the payments company.

Opposition politicians in Berlin have demanded that heads roll in BaFin for its ineffective supervision of Wirecard.

1 Belgium helps Ireland to a Brexit boon
2 Can Grafton Street stop the flood of closures?
3 ‘My rent here is so low it’s a joke’
4 New Powerscourt Springs hotel to open in defiance of virus gloom
5 Bank of Ireland launches €200,000 prize fund
6 Greek loans earn €1.3bn for Germany in last 10 years
7 Why gift a son now if it eats into his tax-free inheritance threshold?
8 Remote working: How to get ahead in a changed world
9 Merchant Hotel owner temporarily lays off 800 staff in the North
10 Is Ireland’s booming economy just an illusion?
Real news has value SUBSCRIBE