EU and US strike deal to boost transatlantic insurance market 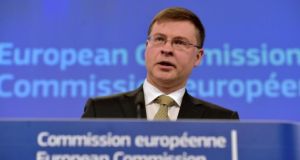 Valdis Dombrovskis: deal will “benefit insurers, reinsurers and policy-holders on both sides of the Atlantic”

The European Union and the United States agreed on Friday to reduce legal and capital barriers so as to boost the $3 billion (€28.2 billion) transatlantic insurance and reinsurance market. The accord has been under negotiation for more than a year and follows an agreement last year on derivatives.

EU and US representatives said in a joint statement that they had reached a deal “that will ensure ongoing robust insurance consumer protection and provide enhanced regulatory certainty for insurers and reinsurers operating in both the US and the EU”.

Under the deal, EU and US authorities will lift requirements for reinsurers to hold more capital against risks if they operate from the other side of the Atlantic, thereby eliminating one key hurdle for cross-border expansion.

“This is a major deal that is set to benefit insurers, reinsurers and policy-holders on both sides of the Atlantic,” said the EU financial services commissioner, Valdis Dombrovskis.

The deal paves the way for EU companies to increase their market share in the US, and for US companies to sell their policies more easily in the 28 EU countries.

The deal needs approval from the European Parliament and US Congress.