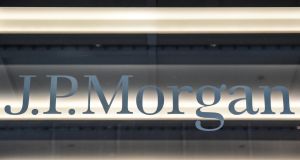 JPMorgan posted a near-doubling of profit in the fourth quarter of 2016 at its investment banking division. Photograph: Reuters

A frenzy of trading after Donald Trump’s election as US president helped JPMorgan Chase deliver a near-doubling of profit in its investment banking unit in the fourth quarter, overcoming an indifferent performance from its core retail business.

Similarly, high end-of-year trading volumes drove a better-than-expected 48 per cent rise in fourth-quarter profits at Bank of America, while US investment house BlackRock reported the largest net inflows of new client money in its history in 2016, despite a 5 per cent fall in net income for the year.

The uptick comes after a tough end to 2015 when banks struggled with tough trading conditions.Shares in all the big US banks have been rising since the US Republicans’ sweep of the White House, the Senate and the House of Representatives, as investors have welcomed promises of higher interest rates, lower taxes and lighter regulation.

Five of the top 10 gainers on the S&P 500 since the election are banks, led by Goldman Sachs (+34 per cent) and Bank of America (+35 per cent). B of A kicked off the fourth-quarter earnings season yesterday with its forecast-busting rise in profits.

“Few bank CEOs supported Mr Trump but they are benefiting nicely from his arrival,” said Erik Gordon, a professor at Michigan Ross. “Investors have to guess whether less regulation will lead banks to make decisions that are more rational and profitable, or more reckless and disaster-prone.”

Investors will be combing through yesterday’s figures from JPMorgan, along with the update from Bank of America and a considerably weaker report from Wells Fargo, to assess whether share prices have run up too high, too soon. The past few years have been a tough time for most of the big banks, as they have faced the profit-sapping effects of tougher capital and liquidity standards, along with stubbornly low interest rates.

Nonetheless, aggregate profits across the system keep grinding higher, as the banks have pushed out more loans and kept losses low, while finding new ways to charge fees. Quarterly net income at federally insured institutions was $45.6 billion in the third quarter, up 13 per cent from a year earlier. – (Copyright The Financial Times Limited 2017