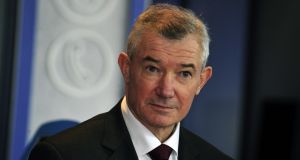 Richie Boucher was appointed to the Greek bank’s board this week. Photograph: Aidan Crawley

Bank of Ireland chief executive Richie Boucher has joined the board of Greek lender Eurobank Ergasias, a bank also rescued by US billionaire private-equity investor Wilbur Ross during the financial crisis.

Mr Boucher (58) became a non-executive director of the Athens-based bank on Thursday, according to a stock exchange announcement in Ireland and Greece on Friday.

Mr Ross (79) who is US president-elect Donald Trump’s nominee to become his secretary of commerce, led a €1.3 billion recapitalisation of Greece’s third-largest bank in 2014, three years after he was involved in a €1.1 billion investment in Bank of Ireland. The New Jersey native went on to sell his Bank of Ireland shares between 2013 and 2015, making an estimated €500 million profit in the process.

Eurobank’s largest shareholder is Toronto-based Fairfax Financial Holdings, which counted alongside Mr Ross’s WL Ross among five North American investors that took part in Bank of Ireland’s 2011 recapitalisation, giving them a combined 35 per cent stake. Fairfax, founded by Canadian billionaire Prem Watsa, sold shares in Bank of Ireland last month, cutting its investment to 2.9 per cent. It originally had an 8.7 per cent interest.

Greek banks were hit by a liquidity crisis and an extended bank holiday in 2015 as a dispute between the government and its troika bailout partners threatened to result in a messy default and the country’s exit from the euro zone.

While both sides eventually agreed a third bailout for Greece in August 2015, the nation’s banks were subsequently found to need more capital after they underwent stress tests overseen by the European Central bank.

Fairfax owns more than 17 per cent of Eurobank, having led a €2 billion investment in the bank in late 2015, which was also backed by companies owned by Mr Ross.

Fairfax’s vice president for strategic investments, Brad Martin, is a non-executive director on the board of both Bank of Ireland and Eurobank.

Eurobank’s latest results show it made an €85 million net profit in the third quarter, flattered by a €55 million gain from the sale of an 80 per cent stake in its insurance unit, Eurolife ERB, to Fairfax for €316 million.

Mr Boucher is not the only veteran of the Irish banking crisis to be tapped by Greek banks. Last year, the country’s largest commercial bank, National Bank of Greece, appointed Mike Aynsley, the Australian banker hired in 2009 to run Anglo Irish Bank after its nationalisation, to its board.

Elsewhere, Bank of Cyprus, in which Mr Ross took a stake in 2014 during the eastern Mediterranean island’s own banking crisis, is currently run by Irishman, John Hourican.

1 Columbia Sportswear defies gloom with first Irish standalone shop
2 ‘The rental situation stops me moving back home’
3 Why are markets booming when a crash is on the way?
4 Could your old car be giving away all your secrets to its new owner?
5 Restaurants file court actions against insurers over lockdown losses
6 Ireland faces 'deep downturn' this year and may not rebound until 2024 if there is a second wave
7 How to further divide the economy using the wage subsidy
8 Former Worldspreads chief Conor Foley faces €730,000 fine
9 Brexit: System agreed for Irish goods to skip checks on UK trade
10 High Court appoints interim examiner to Compu b parent company
Real news has value SUBSCRIBE