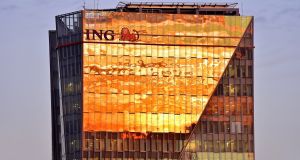 The sun reflecting off the ING building in Bucharest, Romania

Mr Van Rijswijk is a veteran of more than two decades at ING. In 2010 he had been ING’s head of corporate clients, and became the head of client coverage at ING’s wholesale banking arm in 2014. He joined the company’s executive board as chief risk officer in 2017.

ING chairman Hans Wijers said Mr Van Rijswijk had the “right combination of experience, leadership skills and deep understanding of our business” to lead the bank.

In a statement published by ING, Mr Van Rijswijk said he would not “radically” depart from Mr Hamers’ strategy,which focused on developing the bank’s technology platform and digital products, particularly on its smartphone banking app.

“I’m looking forward to further build on our efforts to strengthen ING and enhance our position as one of Europe’s leading digital banks,” he said. “The heart of our strategy sits with the focus on our customers, and that doesn’t change with a new CEO.” – Reuters

1 How safe is it to go back to the office?
2 More than 40% of help-to-buy recipients already had deposit
3 Most workers now expect choice to work from home part-time
4 Owner of Dundrum Town Centre to sell prized assets
5 56 financial firms entered or expanded Irish operations in 2020
6 Elderly parents living in property you own will save you on capital gains tax
7 PTSB slides into loss amid €75m bad-loans charge
8 Twitter faces $250m fine over new data privacy issue
9 New car sales down 14% in July
10 Cinema tensions laid bare by deep crack in theatrical release windows
Real news has value SUBSCRIBE