Mary Whitelaw to become director of corporate affairs and strategy 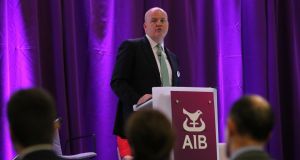 AIB UK’s managing director, Brendan O’Connor, will leave the bank later this year, having signalled his intention to leave some months ago, the bank said in a statement.

Mr Hunt, who succeeded Bernard Byrne as group chief executive in March, has also appointed Mary Whitelaw as director of corporate affairs and strategy. Ms Whitelaw has held a number of senior positions since joining the bank in 2007, most recently chief of staff.

Women now account for four of the nine members of the AIB executive team.

“I believe that the executive team has the right blend of skills, experience to deliver our strategy and back our customers over the coming years,” Mr Hunt said.

AIB is currently seeking to recruit a chief people officer at a time the bank, which employs about 9,800, is seeking 200 voluntary redundancies, across its homes, consumer and distressed-loan units. Staff have until the middle of this month to apply.

Sources expect further job cuts next year as the industry grapples with the squeeze that ultra-low European Central Bank rates are putting on earnings in the sector. AIB had 25,000 employees before the financial crisis.

Mr O’Keeffe, a long-time top executive at the bank, was put in charge of its bad loans unit – called its Financial Solutions Group – in 2015, before taking on the role last November of chief customer and strategic affairs officer.

Mr Mulhall returned to AIB in late 2015 from consulting group Accenture, where he had worked for two years in the US. Prior to that, the executive had worked for the bank for more than 18 years, in a number of areas, including retail banking, digital innovation, change management, governance and risk, customer relations, strategic marketing, and operations management.