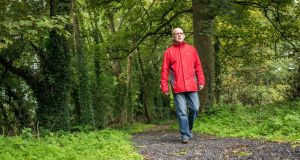 Mike Coffey: he and his family were affected by the tracker mortgage scandal. Photograph: Keith Heneghan

A Castlebar-based family is suing Bank of Ireland in two separate actions over its decision to move them from a tracker mortgage, a decision that ultimately resulted in them losing their home.

Mike and Susan Coffey, in addition to their teenage daughter Jessica, are taking actions against the bank for denying them a tracker rate, ultimately causing them to pay €18,000 more in interest than they should have had they been offered a tracker rate.

Ultimately, the family had to sell their then family home in Co Limerick in 2015 at a time when it was in negative equity. They moved to Castlebar, Co Mayo, to “avoid any onerous questions” by family and friends.

Bank of Ireland, along with five other lenders – AIB, its EBS subsidiary, KBC, Permanent TSB and Ulster Bank – have set aside more than €1.1 billion in provisions to cover redress, compensation, fines and other charges associated with the tracker scandal.

“I should be working for another number of years if things were right. Because I had to leave [work] early, because I was forced into this predicament, I lost out additional years on my pension, additional lump sums. My credit rating has gone through the floor, nobody would give me a red cent. I lost my private insurance, I lost everything.”

In a letter to bank officials, the Coffey’s solicitor, Evan O’Dwyer, wrote: “They can never return to their family home. They can never undo the lies that they told their family and friends in order to maintain their dignity. Jessica will never return to the classroom where she sat and enjoyed life with her friends. Her innocence and her time when she should be enjoying life as a young teenager can never be returned.”

In a statement, Bank of Ireland said: “The tracker issue should never have happened and Bank of Ireland, including our CEO and other senior management, has publicly apologised to customers on a number of occasions. We reiterate that apology again.”