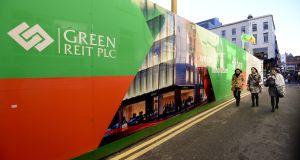 The planned purchaser of Green Reit, UK property fund Henderson Park, will likely be hit as the Government limits the ability of former real-estate investment trusts to continue to enjoy exemptions on capital gains tax.

The planned €1.34 billion sale of Green Reit is set to the first transaction to be hit by a new 1 per cent stamp duty introduced in the budget that will apply to a type of takeover of public companies that previously got around such a charge.

Such a levy on the deal would equate to €13.4 million in income for the exchequer.

In addition, the planned purchaser of Green Reit, UK property fund Henderson Park, will likely be hit as the Government limits the ability of former real-estate investment trusts (Reits) to continue to enjoy exemptions on capital gains tax (CGT) secured during the lifetime of a trust.

The sale of companies through so-called scheme of arrangements, where the group being bought cancels its existing shares and issues new ones to its acquiring company, has been able to avoid a normal 1 per cent stamp duty that applies to the transfer of shares in public companies. Mr Donohoe said that a 1 per cent rate will apply from Wednesday to such “cancellation schemes”.

Dublin-listed property company Green Reit’s planned sale of itself to Henderson Park, announced in July and expected to be completed in November, involves such a device.

Turning to Reits in general, Mr Donohoe has closed off an anomaly in the original 2013 legislation that allowed a trust to distribute proceeds from the sale of a property without shareholders being subject to a withholding tax. It is believed that Revenue has come across at least one instance where this loophole was availed of.

Meanwhile, the benefit of Reits not being subject to CGT on rises in property value will evaporate if it is acquired and ceases to be a trust within 15 years. That opens Henderson Park to tax on capital gains at Green Reit during its six years as a publicly quoted trust.

The Reit legislation was designed in a way that trusts are exempt from capital gains and corporate tax, but that at least 85 per cent of income is distributed by way of dividends to shareholders, who are subject to a withholding tax.

“The Reit framework was introduced to promote stable, long-term investment in rental property by removing a double layer of tax that would otherwise apply on collective investment,” Mr Donohoe said. “It is not intended to provide an exemption from tax on income or gains.”

Separately, the Minister moved on what he called the “aggressive behaviour to avoid tax” that Revenue has found in Irish Real Estate Funds (IREFs), a regime brought in almost three years’ ago.

The Government introduced a 20 per cent dividend withholding tax from January 2017 on IREFs, where at least 25 per cent of the assets are in the form of Irish property.

However, Mr Donohoe said that many of these entities had managed to limit the amount of dividends payable to investors by loading the vehicles with debt. Very often the promoters of such funds have provided the debt financing through instruments known as loan participation notes.

From now on, IREFs will only be allowed to depress their profits – and distributable dividends – with interest payments on debt equating to a maximum of 50 per cent of the total value of property in a fund. In addition, the interest rate payable on such debt will effectively be capped as Revenue will only allow interest deductions of €1 for every €1.25 of a fund’s income.

The Department of Finance estimates that the exchequer will boost its tax income by €80 million a year by its fresh move on IREFs and Reits.

After the speech, Revenue announced a consultation process for the new collection system for applying and collecting dividend withholding tax (DWT) . The new system will see DWT move to real-time reporting by the start of 2021.

Revenue said in a statement that the objective of this new system was to ensure individuals pay the correct amount of income tax and USC on dividend income received by them at the right time, ultimately reducing the administrative cost of collecting underpaid tax and refunding overpayments. The consultation process will run December 12th.