Accounts for think tank show it generated an income of €11.3 million last year 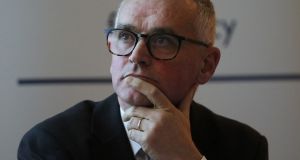 Accounts filed for the think tank show its director Alan Barrett earned a salary of €172,553 in 2018, marginally up on the previous year.

The Economic and Social Research Institute (ESRI) had an income €11.3 million last year while the number of staff earning over €100,000 rose from 12 to 16.

Accounts filed for the think tank show its director Alan Barrett earned a salary of €172,553 in 2018, marginally up on the previous year. The figure excludes €43,138 in pension entitlements.

Overall salaries at the institute, which trades as a limited company, increased from €6.8 million to €7.5 million last year.

The figures show the ESRI made €11.3 million in income last year, down from €11.5 million the previous year.

The bulk of it (€8.3 million) came from research projects while a further €2.8 million came in the form of a Government grant.

The main source of the institute’s research income comes from research carried out for Government agencies and partners, as well as the European Commission.

“The ESRI undertakes research designed to provide knowledge relevant to solving the major economic and social issues in Ireland, ” the accounts stated.

In its latest quarterly commentary it warned that the Irish economy could fall into recession next year in the event of a disorderly Brexit.

In its most shrill Brexit warning to date, it also indicated that the Government may need to hold a supplementary budget in the early part of 2020 to counteract a major shock from Brexit.

It forecast the Irish economy could fall into recession next year, contracting by 1 per cent, if the United Kingdom’s impending divorce from the European Union disrupts business supply chains and results in another major slide in the value of sterling, which hurts exporters here.

1 Why gift a son now if it eats into his tax-free inheritance threshold?
2 Mortgage arrears: Prevention is definitely better than cure
3 Can we finally say farewell to the scourge of hot-desking?
4 Big Four told to outline plans for audit split in UK by October
5 Deloitte was top Irish dealmaker in first half of this year
6 All parties to High Court hearings told to wear facemasks
7 Flights abroad ban could last all summer
8 Dublin council puts Unicorn restaurant demolition plan on hold
9 Ballymore acquires London shopping centre for €83m
10 Columbia Sportswear defies gloom with first Irish standalone shop
Real news has value SUBSCRIBE