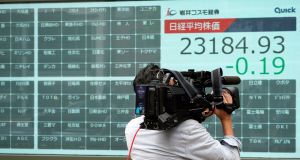 A cameraman films a stock market indicator board in Tokyo, Japan Japan Exchange Group announced it stopped tradings for the entire day due to a system failure. Photograph: Franck Robichon/EPA

The Tokyo Stock Exchange suspended share trading for the full day on Thursday as glitch in its electronic trading system caused the worst outage ever suffered by the world’s third-largest stock market.

The shutdown frustrated investors looking to buy back shares after the first US presidential debate, and could tarnish the exchange’s credibility just as new prime minister Yoshihide Suga makes digitalisation a top priority and Tokyo looks to replace Hong Kong as Asia’s financial hub. The exchange blamed the outage on a hardware problem at its “Arrowhead” trading system, but added that it found no evidence of unauthorised access.

It was the worst glitch since the exchange switched to all-electronic trading in 1999, it said. There have been far fewer technical problems since the introduction of the high-speed “Arrowhead” system a decade ago. Before that, the Tokyo exchange was notorious for system errors and slow trading speeds. “The timing is really just bad,” said Takashi Hiroki, chief strategist at brokerage Monex in Tokyo, about the trading halt. Many market participants had been hoping to buy back their stocks or increase their holdings following the overnight rise on Wall Street, he said.

“The market was robbed of that chance.” Smaller, regional bourses in Nagoya, Fukuoka and Sapporo were also forced to suspend trade because they also use the TSE’s system. That left the derivative-focused Osaka Exchange as the only market still running. Nikkei futures, which trade in Osaka, rose 0.4 per cent on Thursday, in line with a rise in US stocks overnight. Japan Exchange Group, which runs the TSE, said it would update investors.

Fujitsu Ltd, which developed the trading system, said it was investigating the problem. While Tokyo has been eclipsed by Shanghai in recent years as the world’s second-largest equity market, it is still a global centre and a destination for foreign investors. Tokyo’s roughly $6 trillion market now ranks as the world’s third-largest, after New York and Shanghai, according to data from the World Federation of Exchanges.

The Nikkei fell 1.5 per ent on Wednesday, its biggest decline in two months, as an acrimonious debate between US president Donald Trump and Democrat Joe Biden highlighted the risk of an inconclusive outcome to the presidential election in November. - Reuters