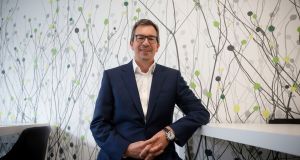 KBC Bank Ireland’s chief executive, Peter Roebben, has given his strongest indication that the bank may sell long-standing problem mortgages to avoid being forced by regulators to set aside more expensive capital against these loans.

“We have to keep the option of a potential sale of the deeper, longer-lasting historical non-performing book,” Mr Roebben said in a wide-ranging interview with The Irish Times.

“We have postponed that for a very long time, trying to work through the situation with customers, which is preferable.”

However, he said the bank faced having to set aside hundreds of millions of euro of capital against these loans if the European Central Bank continued with plans to make banks take additional provisions against legacy non-performing loans.

“If that starts to kick in, it will force us to look at that book again,” he said.

Mr Roebben’s stance on non-performing loan sales has evolved since the executive, who has worked for the wider Belgian-based KBC Group for almost three decades, took over at the helm of the Irish unit last year.

In May 2019, only weeks into the role, Mr Roebben said he did not envisage the sale of Irish private home loans. However, in February this year he opened the door to a potential loan sale, saying the bank had to “continuously monitor the environment” and regulators’ expectations, even as it continued a strategy of restructuring soured debt.

KBC Bank Ireland has more than €1.5 billion of impaired loans, mainly owner-occupier mortgages. That’s the equivalent of 15 per cent of its total portfolio.

While this is the highest non-performing loans ratio among Irish banks, KBC has the strictest classification of problem loans in the market.

Irish banks had begun to sell owner-occupier loans in the past two years as they dealt with their trickiest cases after restructuring more than 110,000 mortgages since 2013. Permanent TSB (PTSB) and Ulster Bank sold portfolios of home loans in the second half of last year.

However, AIB decided in March to postpone the sale of €1.3 billion of a deeply distressed mortgage book at a discounted price as the international market for such assets was hit by Covid-19.

Bank of Ireland subsequently postponed plans to offload a portfolio through a bond market refinancing.

“We have to tread carefully because, in our case, the remaining [non-performing loans] book is almost fully primary dwelling homes, and that is a special issue,” said Mr Roebben.

The KBC executive said he “never really got the narrative in Ireland around vulture funds”, as investment funds that buy non-performing loans are often referred to.

“They have to work with the same consumer protection codes as the banks,” he said.

An NUI Galway study, published in May, that examined 12,650 mortgage possession cases between April and December 2019 found that banks were responsible for two-thirds of repossession actions in the State.

Meanwhile, KBC Bank Ireland processed 6,400 payment breaks on loans to households and small businesses in recent months under an industry-wide initiative to provide relief to borrowers affected by Covid-19.

About half of borrowers coming off initial three-month breaks are taking up the option for a further three-month extension.

Banks are preparing forbearance and restructuring solutions for those who will be unable to return to regular scheduled payments after the period of relief.

Separately, Mr Roebben said he hoped the Central Bank would this year conclude its investigation into KBC Bank Ireland’s role in the tracker-mortgage scandal. The bank has set aside €14 million of provisions for a likely fine.