Fines issued to banks globally could surpass $8.4bn this year

New report from Fenergo shows $5.6bn in penalties issued to date, including for BoI 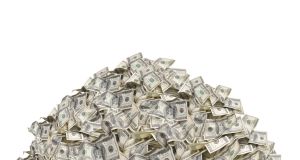 For the first seven months of 2019, financial penalties imposed on banks around the world totalled $5.6 billion.

Fines issued to banks for non-compliance with anti-money-laundering (AML), know-your-customer (KYC) and other regulations, have reached $5.6 billion (€4.7 billion) for the first seven months of 2020. That figure includes the recent €1.66 million fine for Bank of Ireland from the Central Bank.

A new study from Irish fintech Fenergo reveals that $36 billion has been issued in financial institution fines globally since 2008. The total enforcement actions issued in 2020 are expected to be on par with, and may even surpass, the 2019 total of almost $8.4 billion.

For the first seven months of 2019, financial penalties imposed on banks around the world totalled $7.9 billion, although $5 billion of this related to a fine to UBS by the French criminal court.

Amid global trade tensions, sanctions violations made up almost 30 per cent of 2019 fines.

According to the latest figures, fines issued by Asia-Pacific regulators related to AML and KYC violations saw a dramatic increase last year, increasing from $3.5 million to almost $4 billion.

Financial institutions in the United States, Sweden, Germany and Israel were hit hardest, while regulators in Malaysia issued two of the highest-value enforcement actions to date. These include a $3.9 billion settlement agreed with Goldman Sachs for its role in the theft of billions of dollars from the 1Malaysia Development Berhad (1MDB).

France issued 61 per cent of the total amount in fines, followed by the US at 31 per cent. The report indicates that US regulators fined foreign financial institutions more than domestic banks.

The average fine value issued in 2019 to banks was $86.1 million. Twelve of the world’s top 50 banks were penalised during the year.

Overall, the value of fines issued was down 30 per cent versus the same seven months in 2019.

“Although regulatory and supervisory activity may have been impacted by Covid-19, global regulators have reinforced the importance of vigilance and reporting of suspicious activity to ensure the detection and prevention of financial crime throughout the pandemic,” said Rachel Wooley, global director of financial crime at Fenergo.

“As financial institutions continue to face operational challenges in the months ahead, they may struggle to stay on top of other fraudulent activity brought on by Covid-related initiatives, such as the US paycheque protection programme loan programme, which may result in enforcement actions later in the year and into 2021,” she added.

Among the fines issued recently were a $546 million penalty for three Swedish banks for lacking sufficient AML governance and controls in the Baltic states. US authorities including the department of justice, the Federal Reserve and the New York state department of financial services (NYDFS) levied fines of more than $900 million against Israeli bank Hapoalim for tax evasion and money laundering, after discovering the bank had concealed more than $7.6 billion in Swiss and Israeli bank accounts.

In addition, a fine of $150 million was issued by the NYDFS to Deutsche Bank for its links to the late financier and registered sex offender Jeffrey Epstein.

Closer to home, Bank of Ireland last month received a €1.66 million fine by the Central Bank for regulatory breaches, after it transferred more than €100,000 to a fraudster who hacked a client’s email account six years ago.