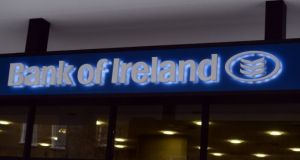 About 40 per cent of Bank of Ireland customers face having to pay additional charges for their current accounts under wide-ranging changes made by the bank that will see the introduction of a flat-rate fee structure.

The bank is introducing a new €6 per month subscription charge which replaces 26 different fees for tranasctions such as taking money from an ATM.

Bank of Ireland said that under the move all customers will shortly pay the same flat fee regardless of how much they have in their account or the number of transactions they make.

“The new pricing structure is simple and transparent, and responds to customer feedback that the current range of charges is complex and hard to keep track of,” it said.

As part of the announced changes, Bank of Ireland is ending its ‘no transaction fees’ offer, which forces customers to have a minimum balance of €3,000 in their account for an entire quarter to avoid charges, in late November.

While most customers stand to gain from the introduction of the flat-fee chrage, about 10 per cent of those who currently avail of the ’no transaction fee ’offer now face an annual fee totalling € 72 rather than the current € 20 per annum . An additional 30 per cent of customers who have low levels of transactions will also end up paying more.

Across all of these customers the average monthly increase is €3 per month, the bank said.

Bank of Ireland is also following in the footsteps of its rivals by making it easier to open personal accounts using their smartphones.

The bank on Friday said customers will be able open a current account digitally in less than ten minutes with supporting documentation upload via their mobile.

Finally, Bank of Ireland said it is introducing mobile payments for customers through Google Pay as of next week. This is something that many of its competitors have long made possible.

“We’ve completely overhauled our digital account opening process to make it easier and quicker than ever to open an account with us,” said Gavin Kelly, chief executive of BoI’s retail banking division.

“We’re also making banking charges easier to understand by doing away with 26 different fees and charges and replacing them with a simple flat fee, a similar pricing model to Netflix or Spotify subscriptions where you pay the same every month and consume as much as you want,” he added.

Bank of Ireland said it will continue to provide free banking for seniors, students and graduates.

Foreign currency debt card and ATM transaction fees will still apply in the future and customers also face Government duty charges as before.

Darragh Cassidy of cost comparison website Bonkers.ie welcomed the pricing changes from Bank of Ireland. He said the new structure was “far easier to understand, more competitive, and means there should be no more ‘bill shock’ every time customers receive their current account fees and charges statement”

He said that up until now, BOI’s fee structure, along with AIB’s, “was particularly poor value” and looked bad, particularly in light of the move by consumers towards cashless payments.

Mr Cassidy said he expected to see AIB respond with an improved offering in the coming months as its fees and charges are now “hugely out of line with all the other providers.”