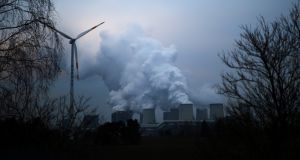 The net cost of wind energy for Irish consumers has amounted to less than €1 per person per year since 2000, according to a new report. Photograph: Hannibal Hanschke

The net cost of wind energy for Irish consumers has amounted to less than €1 per person per year since 2000, according to a new report.

The independent report analysed Ireland’s electricity market from 2000 to 2020 and then simulated how it would have behaved without any wind energy on the system. This is the first time researchers have used historical data to carry out a cost-benefit analysis of wind energy.

The cost/benefit analysis, carried out by energy and utilities consultants Baringa, finds that, over the past two decades, wind energy has delivered €2.3 billion in savings on the wholesale electricity market.

It argues that this means prices for consumers are lower than they would have been without any investment in wind power. The savings outweigh the amount of funding provided to support wind energy through the public service obligaiton (PSO) levy of €1.9 billion over the period, it says.

Generating capacity from wind has increased over that period from almost zero to 4.1 gigawatts.

“For less than a euro a year, wind energy has reduced CO2 emissions by 33 million tonnes and cut the amount spent on fossil fuels by €2.7 billion,” said David Connolly, chief executiv eof the irish Wind Energy Associaiton, which commissioned the study. “That’s great value for money for electricity consumers.”

With the price of wind – both onshore and offshore – falling around the world this was a trend that was only going to improve, Dr Connolly said. The benefit was more pronounced when gas prices were high.

Against this were set the financial benefits of wind energy in EU fines avoided – conservatively estimated at €700 million; reduced capacity payments to fossil fuel companies and the impact of wind energy on wholesale electricity prices.

The cumulative cost of wind energy works out at €63 million, or 66 cent per person, per year.

But Dr Connolly stressed it was an economic analysis and did not factor in benefits such as saving the equivalent of three years’ of Irish emissions; the creation of some 4,000 jobs, ensuring cleaner air and enhancing security of energy supply by enabling a reduction in the importation of fossil fuels.

The success was due to “strong policy and regulator frameworks, set years in advance”, he added. A similar support mechanism would be necessary for the period up to 203O, while the approach could be applied to other sectors such as heat and transport, he said.

Baringa director Mark Turner, who led the research, said: “While consumers generally understand a portion of the PSO levy on their electricity bill is used to support renewable energy, they are less conscious of the role wind energy has in driving down the price of electricity.”

Every day electricity generators – fossil fuel and renewable – compete against each other in an auction to provide power to the suppliers who sell it on to homes and businesses, he explained. “The more wind energy on the system, the more it pushes out fossil fuel generators that are much more costly to run.

“As more wind energy is added, the savings typically increase, so the largest reductions are occurring right now across the years 2018, 2019 and 2020.”

Dr Turner said Baringa did not have “a pro-wind” angle: it worked for all players in the energy sector including fossil fuel companies.

“As an industry we’re focused on reducing the price of wind energy even more in coming years,” Dr Connolly said. “There is enormous potential in developing Ireland’s incredible offshore wind energy resources and still huge opportunities for expanding the amount of renewable energy we can generate onshore.”

With wind energy at its heart, there was no reason why the energy sector could not – alongside solar, hydro and other renewables – provide 70 per cent of Ireland’s electricity by 2030, he said.