Saudi Aramco kick-starts what could be world’s biggest IPO

Delays to anticipated $60bn flotation were triggered by doubts over €1.8tn valuation 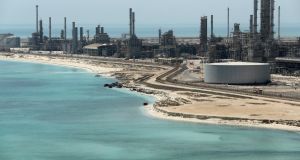 The listing had faced a series of delays triggering doubts over the ability of the world’s most profitable company to secure the $2 trillion (€1.8 trillion) valuation coveted by the kingdom.

A milestone in Prince Mohammed’s aggressive drive to deliver on his pledge to modernise the conservative kingdom, the flotation was tipped to be the world’s largest. Riyadh is hoping to raise as much as $60 billion with a sale of up to 3 per cent of the company. Bankers privately believe that $1.2 trillion-$1.5 trillion is a more realistic valuation.

The company said it would issue the flotation prospectus on November 9th. The final offer price, the size of the listing and the valuation would be determined at the end of the bookbuilding period.

Saudi Aramco’s formal announcement is the closest the government has come to finalising the listing, which Saudi officials said would take place solely on the domestic Tadawul exchange for now.

Saudi Aramco reported $111 billion net income in 2018. Until now, the world’s biggest IPO has been that of Chinese ecommerce company Alibaba in 2014, which raised $25 billion.

However, two sources said despite the formal announcement of an intention to float, Saudi Aramco could still pull the listing at a later stage depending on the response from investors.

The IPO stalled last year amid concerns about the valuation and after the royal court ordered Saudi Aramco to buy a 70 per cent stake in Sabic, the kingdom’s biggest petrochemicals company, from the Public Investment Fund, the country’s sovereign wealth fund.

After the company’s oversubscribed debut $12 billion bond in April, Riyadh revived the listing despite missile and drone attacks on Saudi Aramco’s infrastructure, which temporarily knocked out half of the kingdom’s crude oil production.

Although Riyadh postponed the launch of the flotation again last month, it continued to press advisers to ensure that the listing went ahead this year, with Prince Mohammed keen to prove that his economic reforms are on track, analysts say.

Bankers say there is enthusiasm among Saudis for the listing, with domestic investors expected to comprise the bulk of the offering. Local banks are expected to lend heavily to Saudis to enable them to buy shares. Wealthy merchant families, many of whom were ensnared in Prince Mohammed’s corruption crackdown in 2017, have been pressed to invest.

Foreign investors, meanwhile, have been more sceptical about the kingdom’s valuation expectations, citing governance issues, state interference in corporate strategy and the kingdom’s inability to protect its energy facilities.

Riyadh has also approached sovereign wealth funds in the Middle East and elsewhere to invest in the IPO. Most of the world’s major banks, including JPMorgan, Goldman Sachs, Morgan Stanley and Citigroup, have been working on the listing. – Copyright The Financial Times Limited 2019