Tullow Oil finds itself over a barrel after ‘epic setback’ 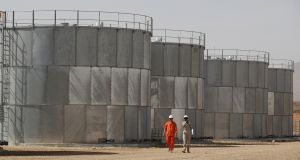 A Tullow interest in Kenya: Having a stomach for oil at all takes a particularly tough type of investor in these climate-conscious days. Photograph: Reuters 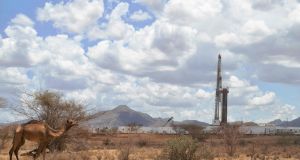 Some £788 million (€917 million) was wiped off Tullow’s value in its biggest one-day drop in three decades on the stock market. Photograph: Getty

The whiff of sulphur around Tullow Oil’s stock continues to linger.

Shares in the company, founded in 1985 by one-time Aer Lingus accountant Aidan Heavey, slumped more than 27 per cent on November 13th after it revealed that oil it recently discovered off the coast of Guyana was found to be heavy and high in the foul-smelling chemical.

The high sulphur content would make developing the so-called Jethro-1 and Joe-1 fields in the South American country much harder than if it were medium or light crude.

Some £788 million (€917 million) was wiped off Tullow’s value in its biggest one-day drop in three decades on the stock market.

Tullow chief executive Paul McDade, coming up on his third anniversary in charge next April, was said to have complained on the sidelines of a natural resources conference in London last week how the share sell-off was “significantly larger” than the value that analysts had placed on the two discoveries before the bad news.

And while sharp slumps of that magnitude are often overdone and followed by a rally of some sort, selling of Tullow continued this week. It reflects how investor confidence has finally been shot after a series of setbacks at the company this year. McDade and his team face a battle regaining trust.

The trading update also saw Tullow Oil cut its oil production forecast – for the fourth time this year – this time due to persistent problems in its wells in Ghana in west Africa, the company’s historical focus, where its world-class Jubilee Field has experienced mechanical issues. The neighbouring TEN field, which started production in 2016, has been the source of most of the downgrades, due to delays in the drilling of fresh wells.

“Despite the significant share-price fall, the lack of visibility on Tullow’s forward strategy and risk of further negative revisions to Ghana production leads us to downgrade [the stock] to neutral,” said Michael Alsford, an analyst at Citigroup, who moved on Friday to pull his previous buy rating on the shares.

Alsford added that the prospect of Tullow raising money in the near term from projects in Uganda and Kenya in eastern Africa looks less certain. Tullow had originally targeted financial investment decisions on these this year.

In late August, Tullow revealed that a deal it struck in early 2017 to sell two thirds of its 33 per cent interest in the so-called Lake Albert Development Project in Uganda to France’s Total and Chinese oil giant CNOOC for a total consideration of $900 million had lapsed amid a tax dispute with local authorities.

Tullow said last week that it remains committed to selling down its stake in the Lake Albert project, which has over 1.7 billion barrels of “discovered discoverable resources”.

For Mark Wilson, an analyst with Jefferies in London, the Guyana shocker represents an “epic setback”, especially in light of production disappointments in Ghana and delays in Uganda and Kenya.

The slew of negative news has all but taken the gloss off Tullow’s move earlier this year to pay its first dividend since 2014 to shareholders. Those that stuck with the business in the meantime went through the global oil price crash in 2014 and 2015 – which posed existential questions for the heavily-indebted company – and supported a distressed £600 million cash call in early 2017.

Having a stomach for oil at all takes a particularly tough type of investor in these climate-conscious days. Indeed 2 per cent Tullow shareholder, Norway’s $1 trillion sovereign wealth fund, itself founded on money from mega oil finds off the country’s coast in the last 50 years, flagged this year that it was selling out of pure explorers that haven’t diversified into green energy.

It has been a while since Tullow, founded by Heavey in 1985 with the backing of family and friends after he heard of an opportunity to rework some oil fields in Senegal, was a market darling.

The company hit the headlines on financial pages in 2000 when it snapped up gas fields in the North Sea from BP, before doubling in size four years later with the takeover of Energy Africa, giving it assets from Ghana to Namibia along the west coast of Africa. It was catapulted into the FTSE 100 index in 2007 following the $1.1 billion takeover of Australia’s Hardman Resources, which boosted its position in Uganda.

Between 2000 and early 2012, when its share price peaked, Tullow’s stock rose in value by an average of 29 per cent a year. To put it in context, annual gains over the same period by the global market, measured by the MSCI All World Index, amounted to about 2 per cent. S&P 500 in the US averaged a little over 1 per cent.

Goldman Sachs analyst Duncan Milligan continues to push Tullow as a buy, though he’s removed the stock from the Wall Street bank’s “conviction list”, having seen it slump by a third since it was included on the list in May.

Milligan is now looking beyond the recent Guyana disappointments to focus on another well – called Carapa – off the Latin American country’s coast that is currently being drilled. Results from this well, in which Tullow has a 37.5 per cent stake, are expected in the next two months.

“We continue to see Guyana as one of the premier global exploration successes,” said Milligan. “The combination of its large scale, along with tax terms designed to incentivise investment and relatively benign water, make it an unusual opportunity.”

For followers of the oil industry, hope springs eternal.