Shell yields to investors by setting target on carbon footprint 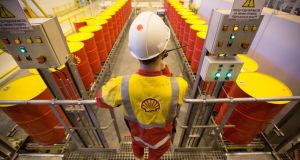 Shell now aims to curb its net carbon footprint, including emissions of its consumers, by around 20 per cent by 2035. Photograph: Andrey Rudakov/Bloomberg

Royal Dutch Shell will set carbon emissions targets next year and link these to executive pay, reversing its chief executive’s opposition and following intense pressure from shareholders who want fossil fuel companies to take greater responsibility for their contribution to global warming.

Investors such as the Church of England and Robeco have pushed Shell to make firm commitments to cut its carbon footprint, saying last year’s announcement of a long-term “ambition” to halve carbon emissions by 2050 did not go far enough.

By setting targets “we will be systematically driving down our carbon footprint over time”, chief executive Ben van Beurden told the Financial Times on Sunday. “We all know the benefits of energy but there are associated effects that we have to manage.”

Shell also said it will link energy transition targets to the long-term incentive plans of senior executives, subject to a shareholder vote in 2020. Shell said it was still in talks with investors about the percentage to be targeted but the remuneration of 1,200 top employees could be affected.

“It is a massive step change,” said Adam Matthews, director of ethics and engagement for the Church of England Pensions Board. “This presents a model for how [companies] can proceed.”

The announcement comes as the annual UN climate talks start in Katowice, Poland, when signatories of the Paris climate agreement will try to agree on the rules for how the deal will be implemented from 2020.

The world has already warmed by about 1°C since pre-industrial times, largely due to emissions from the burning of fossil fuels, and the Paris climate agreement aims to limit temperature rises to well below 2°C.

The pledge - the first of its kind in the sector - is a significant shift for Mr van Beurden, who said in July that setting hard targets was a “superfluous” exercise that would expose the energy major to litigation should it fail to meet them.

Mr van Beurden said it was “dialogue” with investors that had led to the “evolution” in Shell’s position, with the short-term targets creating a more effective and flexible way to manage the company through an uncertain, multi-decade energy transition.

Shell is ahead of its peers such as UK energy major BP and ExxonMobil in the US in its public commitments to reduce carbon emissions. Shell’s long-term goal announced in 2017 also includes the emissions of third parties, such as cars that burn Shell’s petrol and diesel.

Shell now aims to curb its net carbon footprint, including emissions of its consumers, by around 20 per cent by 2035, and will start setting specific targets each year from 2020 for the next three- to five-year period.

The company plans to increase the share of gas in its production mix from 50 to 75 per cent, is investing more in low carbon energies and has sought to reduce the leakage of methane from wells, pipes and pumps.

The latest move has been backed by Climate Action 100+, a group of international investors with more than $32 trillion in assets under management, which has pushed for the biggest corporate polluters to cut emissions and improve disclosures and governance on climate issues. The group includes Calpers, Legal & General Investment Management and UBS Asset Management.

Investor concerns have mounted about the risks associated with holdings in fossil fuel companies - not only tied to their role in global warming but also because oil and gas projects could become uneconomic should the world move more towards using cleaner fuels.

The company has also pledged to review its membership of industry lobbying groups which may take a stance on climate-related topics that undermines the goals of the Paris deal - a significant concern of investors.

Shell, like other energy companies, is grappling with how low-carbon investments can generate similar revenues and dividends as its legacy projects. Even as a big spender in this space compared to peers, it is still only committing 8 per cent of its annual capital expenditure of $25 billion to clean energy projects. – Copyright The Financial Times Limited 2018

1 How much state pension will I get next year?
2 Oxford Covid vaccine trials offer hope for elderly
3 Ulster Bank to introduce new card payment controls on app
4 How long can Government afford to keep State pension age at 66?
5 Investors unnerved by Brexit, Covid-19 and US election jitters
6 Budget 2021: fuel prices rise and high-emission cars hit
7 Hurrah for the companies giving staff more time off
8 Sustainable investment: How your pension can help tackle climate change
9 The baroness with grande distribution in her blood
10 Start-up Loanitt raises €570,000 as it looks to double headcount
Real news has value SUBSCRIBE