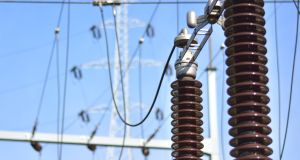 National electricity grid operator Eirgrid is planning a €110 million-plus boost to part of its network to meet rocketing demand from data centres and the expanding economy.

Eirgrid manages the system that transmits electricity from generators to local distribution networks through which it ultimately travels to homes and businesses.

The State company wants to connect two substations in Woodland, Co Meath, and Dunstown, Co Kildare, at a cost of between €110 million and €190 million to strengthen its network to meet the east coast’s growing demand for electricity.

Greater Dublin’s electricity demand could double in 10 years, partly as a result of economic growth, but mainly due to the number of data centres planned by multinationals for the region.

This means that over the next decade, demand for power in the capital will grow by the same amount as it did over the last 100 years.

Eirgrid is weighing five options for the expansion, which it has dubbed “Capital Project 966”.

These include building either a new 400 kilo volt (kv) or 220kv overhead line along a 60km route between Woodland and Dunstown.

Some of the State company’s previous plans to bolster the grid have run into controversy stoked by fears of the environmental impact of high-voltage lines. Objectors regularly demand that Eirgrid put these underground.

While the company is considering this, it would be the first time anywhere in the world that a 60km high voltage line was put under ground. As a result, this would involve extra risks and costs.

On current estimates, the cheapest option, upgrading existing lines, would cost €110 million, while the most expensive would come to €190 million.

Eirgrid is beginning public consultations on the five options this weekend. Once it has narrowed down the choices, the company hopes to seek permission for the work from An Bord Pleanála within the next two to three years.

Much of the power fed to the region comes through two high-voltage lines running from Moneypoint, Co Clare, to Dunstown and Woodland. If there is a problem with either, electricity can be diverted to the other.

However, as this could create bottlenecks, Eirgrid needs to connect the substations where the high-voltage lines end.

Eirgrid spokesman David Martin explained that the lines were over 30 years old but were carrying more power than ever before.

“This is an important project that will secure energy supply in Meath, Kildare and Dublin and underpin economic growth in the region,” he said.

The lines carry large quantities of electricity generated by windfarms concentrated mainly in the southwest.

About 30 per cent of the power used in the country comes from renewable sources, with wind responsible for the bulk of that.

This means that a high proportion of the energy that the east coast consumes is generated in the west, which has the higher wind speeds.

“A modern and stable infrastructure with capacity to meet future industry needs is critical if Ireland is to maintain its international competitiveness,” the agency said.