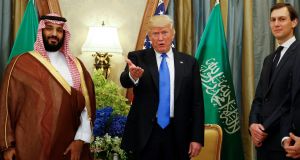 Oil’s poised for a seventh weekly loss after Saudi Arabia signalled its output may have reached a record, while America’s growing crude stockpiles stoked concerns over a potential supply glut.

Futures retreated as much as 3.3 per cent in New York, set for a 5.5 per cent drop this week.

Saudi Arabia is producing in excess of 10.7 million barrels a day, Energy Minister Khalid Al-Falih said, giving the strongest indication yet that the kingdom has boosted output to record levels.

Meanwhile, US crude inventories rose for a ninth week in the longest run of gains since March 2017.

Crude collapsed into a bear market this month as America’s temporary waivers that allow some nations to continue importing Iranian oil boosted the prospect of higher global supplies.

Oil’s volatility increased this week to the highest since 2016 as investors avoided risky assets including commodities amid US confrontation with China over trade. Meanwhile, US president Donald Trump continues to demand OPEC to lower prices by pumping more.

“Prices have taken a dive as Trump continues to put pressure on OPEC and Saudi Arabia to create a low-price environment, and that has coupled with increasing American stockpiles,” said Hong Sungki, a Seoul-based commodities trader at NH Investment and Securities Co. “A potential game-changer will be what OPEC+ agrees to do in terms of supply.”

While there was no settlement on Thursday due to US Thanksgiving holiday, the contract is on course for the longest weekly losing streak since August. Total volume traded was more than seven times above the 100-day average.

Brent for January settlement fell 52 cents, or 0.8 per cent, to $62.08 a barrel on the London-based ICE Futures Europe exchange. The contract headed for a seventh weekly drop, with a 7 per cent loss.

The global benchmark crude traded at a $8.69 premium to WTI for the same month, after closing on Thursday at the lowest premium since August 31st.

Earlier this month, the Organization of Petroleum Exporting Countries and allied producers warned that markets will probably be oversupplied in 2019, while American stockpiles expanded to the highest level since December 2017 last week.

Meanwhile, US oil producers are pumping the most since at least March 1983, according to government data.

While indicating that Saudi Arabia is producing at record levels, Al-Falih also said the world’s biggest exporter won’t oversupply the market. Demand for Saudi crude may be lower in January compared with December, he told reporters on Thursday. – Bloomberg

1 How can I view my dead brother’s will if I’m not the executor?
2 Facebook faces $9 billion tax trial in US over Irish offshore deal
3 Provisional liquidator appointed to Dublin engineering firm
4 Investors pile into Irish property as turnover in build-to-rent sector reaches €2.54bn
5 Bursting of Tesla bubble a case of ‘not if, but when’
6 Kerry’s Chinese sales set for 30% hit from coronavirus
7 Mount Charles wins €10m catering contract at Maynooth University
8 Legal row erupts over €85m contract
9 Bank of Ireland staff in line for 2.95% pay increase
10 Travel costs for IDA chief topped €45,137 last year
Real news has value SUBSCRIBE