Energy giant currently in the midst of selling up to €26.3bn of assets to cut its debt pile 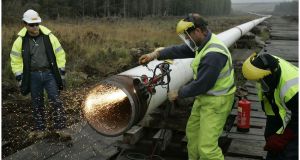 The dismantling of a section of the Corrib Gas Line, at Aughoose, Co Mayo, in 2005. Photograph: Dara Mac Dónaill

Shell has completed the sale of its stake in the Corrib gas field off the Mayo coast, ending its involvement in the most controversial infrastructure project in the history of the State.

Shell, currently in the middle of selling up to €26.3 billion of assets to cut its debt pile, agreed to sell its 45 per cent stake to a unit of the Canadian Pension Plan Investment Board. The deal leaves it with losses of up to €1 billion.

The transaction includes an initial consideration of €840 million, interest of €47 million, and additional payments of up to €250 million between now and 2025, subject to gas price and production.

Completion of the deal represents Shell’s exit from the upstream sector in the Republic. Shell Energy Europe Limited has signed an agreement to purchase Corrib gas following completion.

Shell retains a presence in the Republic through its aviation joint venture, Shell and Topaz Aviation Ireland.

Discovered 21 years ago, the Corrib gas field was dogged by years of opposition before natural gas started to flow from the field in December 2015. Shell acquired a stake in 2002.

Between August 2005 and June 2014, the policing of protests and protection of workers at project sites cost the State some €16.4 million, mainly due to the deployment of gardaí.

Sources said that three partners behind the field – Shell, Norwegian oil and gas group Statoil and Canada’s Vermilion Energy – had invested almost €4.3 billion in the project.

At peak production, Corrib has the potential to meet up to 60 per cent of Ireland’s gas needs and is expected to supply fuel for up to 20 years.