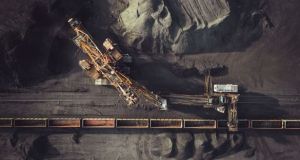 Revenues are up at titanium miner Kenmare Resources.

Revenues at titanium miner Kenmare Resources rose by 37 per cent in the first half of the year, as the resources group benefited from a surge in shipments of ilmenite, the most important titanium ore.

Revenues at Kenmare increased 37 per cent to $140.1 million (€122.5 million), as a result of increased prices and sales volumes. The firm, which is listed on the Dublin and London stock exchanges, operates the Moma Titanium Minerals Mine in northern Mozambique and says it produces 8 per cent of the world’s demand for titanium dioxide, used in the production of paints, pigments and plastics.

Michael Carvill, managing director, said that the first half of the year was an “excellent” period for the company, with a record 589,000 tonnes shipped at increased prices, generating $48.4 million in operating cash flow.

“Our capital projects and studies are progressing well and we aim to deliver a significant increase in final product production by 2021, funded by internally generated cashflow and our strong balance sheet. The board has now approved the development of the high-grade WCP C Dredge Mining Project, an exciting and capital efficient project which is expected to deliver an IRR of at least 30 per cent,” he said.

Kenmare warned that as in previous years, sales of ilmenite might weaken due to “some seasonal weakness in the Chinese ilmenite market over the summer months”. As a result, the company said that it is likely that ilmenite sales volumes will be lower than forecast production in the second half of its financial year.

Kenmare Resources said it will hold a capital markets day on October 16th offer more details on its strategy, as well as details on its dividend policy for the future.