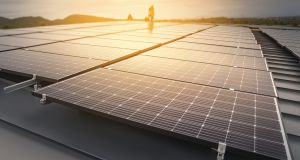 Power Capital Renewable Energy is set to be a dominant player in the emerging Irish solar sector over the next decade. Photograph: iStock

With Omnes’s backing, PCRE will focus on developing and building a 500 megawatt (MW) solar PV portfolio in Ireland – it was awarded a feed-in tariff for four projects in the first auction under the Government’s renewable electricity support scheme (RESS-1) in August, and is set to be a dominant player in the emerging Irish solar sector over the next decade.

PCRE was set up by Justin Brown and Peter Duff in 2011. It began by acquiring and asset managing utility scale solar parks in Germany. Recognising the opportunity closer to home, it began to grow and develop an Irish pipeline – with projects going from greenfield sites through to fully commissioned operating power plants.

PCRE managing director Justin Brown said it was a significant investment by a highly regarded European infrastructure fund. “We look forward to developing high-quality projects which will provide local jobs and investment in communities, whilst also help in reducing Ireland’s carbon footprint.”

The company always planned to be a dominant player in the Irish solar market, he added. “We were early out the blocks in 2015. We knew it was only a matter of time and having the right Government support using tried and tested technology.”

With its Irish pipeline currently standing at 300 MW it “is going to be right there on the leader board”, he said. It has 200 MW ready to build; 150 MW about to go into planning, with construction set to begin in the second half of 2020; investment totalling €250 million. PCRE expected to have nine to 10 projects in the RESS-2 auction – it currently has 30 sites concentrated in the east and south of the country.

The partnership with Omnes, Mr Brown said, marked a significant shift in its business plan. In the past its emphasis was on building solar developments with a view to eventually selling them off to a utility or fund; now it was going to become an independent power producer but also intends to grow this through further development; acquisition of assets, co-development and partnership opportunities – including land owners, farmers and communities.

Omnes partner Michael Pollan said: “Our partnership will allow PCRE to transform into a true Irish independent power producer in the coming years and build a strategic position in Irish solar PV.”

Mr Brown said solar costs were continuing to reduce because of increased efficiencies and advancements in PV technology, while the recent auction showed solar PV and onshore wind “were able to compete with each other with consumers benefitting”.

Ireland had a huge amount of onshore wind, “which is great when the wind blows, especially in winter time”, while lack of renewables in summer time when the wind does not blow would be increasingly addressed by solar, he said. This would mean more renewables on the grid, more efficient energy production and less fossil fuels; “a good thing for Ireland”.

The State aiming to have 70 per cent renewables on the power grid by 2030 “is the appetiser”, and going to 100 per cent was necessary, he said. “We are excited to be working along with wind energy in achieving that.”

With offshore wind set to scale up in the second half of the coming decade, the country was “finally on its way” in embracing renewables at scale, Mr Brown added.

Omnes managing partner Serge Savasta added: “We are delighted with the strong level of interest and appetite to commit that investors are showing towards Capenergie 4; underscoring the success of our unique investment approach combining private equity and infrastructure, which the team has put into play since 2006 to transform Europe’s renewable energy developers into independent power producers.”

Capenergie 4 has exceeded its target size by raising more than €500 million in capital from French and European institutional investors over the past year. It has a diversified mix solar PV and onshore wind investments spread over 11 European countries – and a total of €4 billion in total of assets under management.