Gleeson will take over on August 6th 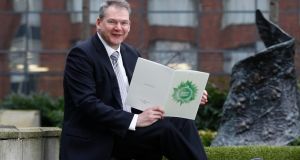 Irish Water has appointed a new managing director who will also serve as deputy chief executive of the company’s parent, Ervia.

Niall Gleeson, currently a senior director with Shanahan Engineering, will join the company on August 6th. He replaces interim boss Eamon Gallen who took up the role in September when Jerry Grant retired from the role.

His appointment to both Irish Water and Ervia comes after Ervia’s former chief executive announced his intention to leave the company 18 months into a seven year contract.

“I am delighted to welcome Niall Gleeson to Irish Water. Niall brings to us a wealth of engineering experience, business expertise, and leadership and engagement of teams, and the board and I are looking forward to working with him,” said the chairman of Ervia’s board, Tony Keohane.

When Mr Quinn announced at the end of January that he was to leave the company, it said it would begin the process of selecting a new chief executive “shortly”.

Cathal Marley, the chief financial officer of Ervia, will take up the chief executive role on an interim basis from April until a permanent successor is found.