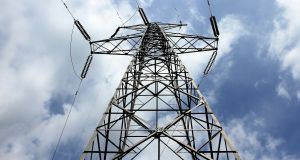 The North’s regulator denied Brexit was behind its move to set up its own retail IT system, insisting the timing was purely coincidental. Photograph: Reuters

The drive to create an all-island electricity market is under threat with the Northern Ireland Utility Regulator planning to break from the Republic on a key aspect for retail electricity.

The North’s regulator denied Brexit was behind its move to set up its own retail IT system, insisting the timing was purely coincidental. Its decision is opposed by most market participants.

Since 2012, the “shared market message IT platform” has been the central hub for recording customer details on both sides of the Border. The platform essentially alerts operators when customers switch supplier and ensures correct meter readings are allocated to the correct suppliers.

However, the rollout of smart metering in the Republic is expected to result in an “extended freeze” of the system for a number of years, which the Northern Ireland Utility Regulator says will restrict its ability to implement new policies and carry out its duties as a regulator.

“This has highlighted that the implementation of any large-scale change project initiated in either jurisdiction could cause extended system freezes in both Northern Ireland and Republic of Ireland,” it said.

Last year the North’s regulator initiated a consultation process, seeking industry input on its divergence plan. In its information paper, it said it had received nine responses from market participants, including submissions from ESB Networks and Northern Ireland Electricity (NIE) Networks.

“Respondents were not in favour of bringing an end to the harmonised retail market systems,” it said. Suppliers indicated to the the regulator that their costs would rise if the shared market message platform did not exist.

However, the regulator said the responses did not quantify the actual costs which would be incurred.

While NIE Networks submitted detailed proposals aimed at addressing the regulator’s concerns, they “did not offer any guarantees on the future of policy delivery in Northern Ireland”, it said.

After several further engagements with NIE Networks, the regulator said it had concluded that “the next step is for NIE Networks to initiate the IT project to separate the integrated retail market systems”.

Responding to the development, Green Party leader Eamon Ryan told The Irish Times that while the proposed change was technical in nature, the fear was that it would start to “unpick the energy co-operation we’ve had thus far”.

“These managed services, the ways in which we allow customers maintain flexible arrangements, are not unimportant and are at the centre of the innovation that’s taking place,” he said.

“So for the two regulatory systems to take a different approach to those is major step towards divergence, and that’s a real concern,” he said.

Antoin O’Lachtnain of Digital Rights Ireland said: “The de-harmonisation of the retail market is not a fatal blow for the all-island electricity market, but it is definitely a step in the wrong direction,” he said.