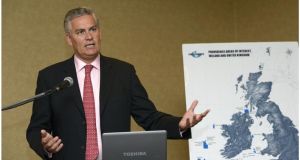 Tony O’Reilly, chief executive of Providence Resources, which has secured a partner to develop its Barryroe find off the coast of Cork. Photograph: Brenda Fitzsimons

Analysts at London-based Mirabaud have initiated coverage on Irish exploration company Providence Resources with a “buy” recommendation and a target share price of 33 pence. This is some 67 per cent ahead of its 52-week high of 19.75 pence that was recorded on April 7th last year.

Providence, which is led by Tony O’Reilly, slipped below 11 pence in London yesterday, a day after it announced that it had found a partner – Chinese group Apec – to develop its Barryroe oil find off Cork.

Mirabaud, which has provided corporate finance services to Providence, said this deal “should mark a major inflection point” for Providence, while also noting that shareholder have not had an “easy ride” in recent years.

Meanwhile, analysts at Cenkos, a corporate broker to the company, have estimated that the three-well drilling programme could cost $100 million. It values Providence’s full portfolio on a “risked basis” at $242 million or 29 pence a share in the near term.