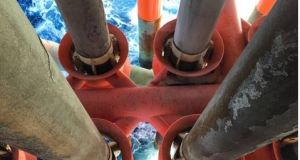 Six years after it was declared commercial, Providence Resources has found a partner to exploit its Barryroe oil find off the Cork coast. Chinese group Apec will pay half the drilling costs and loan the other half to Providence at 5 per cent more than London interbank wholesale rates.

In return, the Chinese player will take 80 per cent of Barryroe’s proceeds until the debt is repaid. Apec will also supply the rig – part of its strategy is to use Chinese-made equipment to explore for and exploit oil and gas.

Essentially, Apec will pay for the operation and take most of the proceeds, at least until it recovers its loan, after which point it will split revenues 50/50 with Providence. Once the drilling programme is complete Apec will have the right to become operator for the development/production phase, and can buy 59 million Providence shares at 12 pence sterling each.

The deal does not look all that attractive from Providence’s point of view. Presumably the key thing for the Irish explorer is that it has finally got a partner for what the company has always said is an attractive, commercial oil well. Investors waited a long time, and the 30 per cent climb in Providence’s share price on Wednesday clearly indicates their relief at the news.

Nevertheless, this is Providence’s best asset, and it looks like its partner will take the lion’s share of any revenues and has the option of taking control of production. Apec clearly thinks Barryroe is worth exploiting, but its terms indicate that the Chinese group ranks it as a relatively high risk.

Another element of the deal allows for the pair to jointly explore other licences off the Republic’s coast in the future. Providence has not had much luck with this recently. It abandoned a potential well further out in the Atlantic after finding water rather than oil.

That is the nature of oil exploration, particularly in a territory such as Ireland, where the industry has met little success. Presumably Providence is betting that there is another Barryroe out there somewhere.