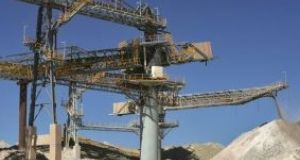 During the first quarter of 2017, Kenmare shipped 256,100 tonnes of finished products.

The explorer, which operates the Moma mine in northern Mozambique, recorded solid production in the first three months, particularly for its main revenue-generating products of ilmenite and primary zircon, in what is traditionally been a low-producing quarter.

It added cash generation at the mine continued to improve in the period.

“Demand for ilmenite was strong in the first quarter, due to solid offtake in the Chinese spot market for pigment and slag production. Demand for imported ore also benefited from some disruption in Chinese domestic ilmenite production, due to stricter enforcement of environmental regulations. This was despite an increase in ilmenite by-product volumes in the second half of 2016 due to higher iron ore prices,” Kenmare said.

“Output from southern India has also reduced in recent months due to a mining ban imposed by the authorities, subject to a pending court case. Ilmenite prices have increased strongly in the past 12 months and are expected to incentivise the restart of some supply to meet additional demand, which may lead to a moderation of future price increases as the market reaches greater equilibrium,” it added.

The level of ore mined rose 19 per cent to 8.4 million tonnes, at an average grade of 4.86 per cent, producing 353,500 tonnes of heavy mineral concentrate (HMC), a 29 per cent increase on the same quarter a year earlier.

Finished product volumes were up 39 per cent, and zircon production was up 59 per cent.

HMC production rose by 29 per cent to 353,500 tonnes versus the first three months of 2016 but declined in comparison with the preceding quarter.

Kenmare reported in January that 2016 was a record year for both production and shipments of products from the Moma mine as it forecast higher prices for 2017.

1 Galway development could transform skyline with 21-storey tower
2 How do you know if you are wealthy? ( It’s not straightforward!)
3 The gadgets that can make travelling a bit more enjoyable
4 High Court overturns permission for height increase in Dublin apartments
5 Big tech ‘procedural queries’ delay decision on first data fines – watchdog
6 Don’t be fooled by Facebook’s ‘regulate us, please’ media blitz
7 Ardagh sees earnings growth slowing after solid 2019
8 ESB called out for ‘contributing to human rights violations’
9 Just 8,000 houses built last year offered for sale on open market, says CIF
10 How can I view my dead brother’s will if I’m not the executor?
Real news has value SUBSCRIBE