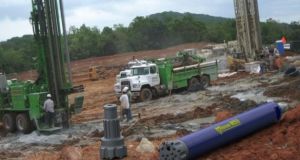 Growth in Mincon manufactured product was up 7 per cent to €56.3m while third- party sales increased by 13 per cent to just short of €20 million

The Clare-based firm, which specialises in the design, manufacture, sale and servicing of rock-drilling tools and associated products, reported pretax profits of €11.3 million, up from €9.6 million a year earlier.

Revenues increased 8 per cent to €76.2 million from €70.2 million as the Dublin-listed company recorded a rise in turnover of both its own and third-party products.

Growth in Mincon-manufactured product was up 7 per cent to €56.3 million while third-party sales increased by 13 per cent to just short of €20 million.

“While the group has weathered the cyclical downturn reasonably well, showing the defensive characteristics of the market position and products, still we will expect to see price pressure, increasing competition, and a demand for rapid delivery of consumables as customers destock to suppliers,” it said.

Operating costs as a percentage of revenue was 27 per cent in 2016, up 1 per cent on the prior year.

The group said it has spent €15.4 million on nine acquisitions in the past three years from the net IPO proceeds of €47 million and distributed over €4 million a year in dividends.

“The Mincon Group took stock in 2016 and decided to focus on assimilating what we had acquired, to begin standardising our management systems, and to develop a commonality in our marketing, brand and sales approach as we move towards building a 2020 strategic plan, and setting aggressive objectives for growth in sales and profits,” said chief executive Joe Purcell.

“There has been a tone change in the market in 2016, the prices of commodities are on the rise, the companies in our sector speak with a new confidence and enthusiasm, and we see early evidence of renewed interest in reopening and developing business in some of the markets and sectors in which we operate,” he added.