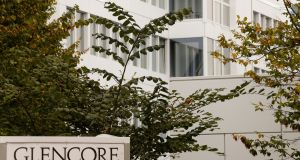 Adjusted profit rose to $1.99 billion from $1.34 billion a year ago, the Switzerland-based company said in a statement. That compares with an average analyst estimate of $1.59 billion.

Owner Ivan Glasenberg has turned around the business from a 2015 crisis, when investors dumped shares on concern debt was too high to weather a prolonged downturn in commodities. A little over a year later, borrowing has halved from $30 billion thanks to asset sales, cost cuts and rebounding metals prices.

In December, Glencore said it would pay $1 billion in dividends this year and distribute more generous payouts in 2018, when it would tie the dividend to a proportion of profits from its industrial division.

“The plan of action we initiated in September 2015 to sensibly bring down our financial leverage and strengthen our balance sheet is now complete,” Mr Glasenberg said in the statement.

Glencore shares have more than doubled over the past year as a growing optimism about Chinese and US economic growth bolstered confidence in the outlook for miners. In recent months, Mr Glasenberg has returned to acquisitions, with deals to increase copper production in the Democratic Republic of Congo and oil trading in Russia.