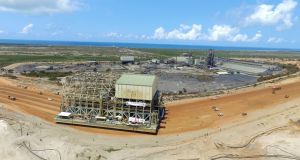 The movement of Wet Concentrator Plant B. Production at the new ore body is set to begin ahead of schedule. Photograph: Kenmare Resources

Exploration firm Kenmare Resources said it expected the final quarter of 2020 to be its strongest for production, as production at a new ore body was set to begin ahead of schedule.

The company, which is a leading producer of titanium minerals and zircon, and operates the Moma titanium mine in northern Mozambique, said mining is expected to commence in the Pilivili ore zone in the coming days after the relocation of a wet concentrator plant in September. That is ahead of its original target of the middle of the quarter.

“Downtime for the move is estimated at less than eight weeks, which is a significant achievement by our team,” said Michael Carvill, managing director of Kenmare Resources. “Consequently, Q4 2020 is anticipated to be our strongest quarter of the year for production, with Wet Concentrator Plant B mining high grade ore and taking us an important step closer to our goal of producing 1.2 million tonnes per annum of ilmenite on a sustainable basis.”

The group reported heavy mineral concentrate production of 258,000 tonnes in the third quarter of 2020, which ended on September 30th. This was a 15 per cent decline year on year as the company temporarily ceased production on one of its wet concentrator plants to move it to the new site.

Total shipments of finished products reached 118,000 tonnes, a 39 per cent decrease year on year. This was attributed to improvement works on a transhipment vessel and continuing poor sea conditions. However, the fourth quarter of the year has begun well, the company said, and is expected to be the strongest of the year.

Mr Carvill said it was encouraging to see see pigment markets bouncing back more quickly than expected from Covid-19-related restrictions. “Consequently we believe the outlook for the ilmenite market is robust in Q4 and continuing into 2021.”

1 Basic income for all: Has the Covid crisis given us a new economic model?
2 Direct sea routes to Europe offer certainty in choppy Brexit waters
3 ‘I don’t need to do any of this. . .I don’t actually need to work.’
4 Admission of mistake in Oxford vaccine dose raises doubts over reliability
5 Promontoria barred from pursuing doctor over Ulster Bank loan
6 There was no vaccine for Anglo: Why the last crisis was different
7 Only way is up for Stripe as valuation skyrockets
8 Kinzen raises $2.2m as it helps clients fight ‘misinformation’
9 Online shoppers face unwelcome tax surprise
10 Pandemic brings a halt to Zara-owner’s Irish expansion
Real news has value SUBSCRIBE