Sawmills import 100 truckloads of timber from Europe to combat shortages 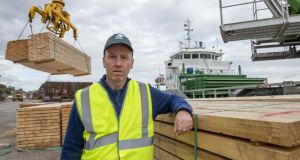 Sawmiller GP Wood imported 100 truckloads of timber from Europe this week to combat a looming shortage in the Republic.

The Oireachtas has just passed new laws aimed at ending a planning logjam that has tied up enough timber to build 50,000 new homes, according to some estimates.

However, Cork-based GP Wood this week shipped in 4,500 metres of timber from Germany and the Benelux countries to maintain supplies to customers, according to managing director Niall Grainger.

He estimated it would take 100 truckloads to transport the timber, ultimately destined for the Republic’s construction industry, which needs the material to build new homes.

GP Wood has a further five vessels booked to ship timber here between now and February 2021. Another operator is understood to be waiting on a shipment from Archangel, Russia, in coming days.

Along with supplying key customers, Mr Grainger explained that the timber would support jobs at his company’s sawmills, which employ 250 people.

The sawmill boss noted that world prices for sawn timber were high on the back of demand across Europe and the US, where many regions are grappling with housing shortages similar to the Republic.

Taking into account the higher cost of buying and shipping in the timber, he calculated GP Wood was only likely to break even, denying it the opportunity to make a profit that could be reinvested in the business.

The industry blames a two-year backlog of appeals against tree felling and other forestry licences in the Department of Agriculture for the shortage of a material the Republic normally exports rather than imports.

A recent amendment to the Forestry Act, 2014, and a department pledge to hire more staff for its Forestry Appeals Committee, are meant to speed up the process and end the logjam.

However, Mr Grainger said he was not confident that the Government would work quickly enough to clear the backlog.

“I would be hoping that we would see some results by Christmas, but it’s going to take a lot of hard work for that to happen.”

He added that State company Coillte, which supplies most of the logs used by businesses such as GP Wood, must put the material on the market “in a sane fashion” when it does become available.

Mr Grainger argued that Coillte should avoid auctioning wood to an industry already starved of supplies.