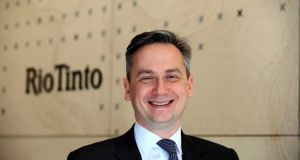 Chief executive Jean-Sebastien Jacques, who has led Rio Tinto since 2016, will step down by March 31st.

Rio Tinto parted ways with its chief executive and two deputies on Friday, bowing to a shareholder outcry over the destruction of two significant Aboriginal rockshelters and what was seen as the miner’s inadequate initial response.

The departures are the highest-profile examples yet of the increasing muscle of institutional investors to hold companies to account for actions that fall short in areas such as human rights obligations and expected community standards.

They also come amid heightened sensitivity in Australia to its treatment of Aboriginal people, who are over-represented in the country’s prisons and suffer poorer health and shorter average life spans.

Chief executive Jean-Sebastien Jacques, who has led Rio since 2016, will step down by March 31st next year, while iron ore boss Chris Salisbury and Simone Niven, head of corporate relations, the unit responsible for dealing with indigenous communities, will also depart.

The executive changes “should be a wake-up call for the Australian iron ore sector and mining companies worldwide on their relationships with First Nations people,” said Brynn O’Brien, executive director of activist investor the Australasian Centre for Corporate Responsibility.

Activists and investors said Rio had fallen short in an earlier board-led review into how the miner legally detonated rockshelters showing 46,000 years of human habitation at Juukan Gorge in Western Australia against the wishes of traditional owners. The review had recommended cutting short-term bonuses for some executives.

Australia’s largest pension fund, AustralianSuper, said it was satisfied that “appropriate responsibility” had now been taken by Rio Tinto executives, although it added that nothing could undo the destruction of the culturally significant sites.

Others suggested further action was likely.

“[This] is the right outcome and raises the question about what happens next at the board level,” said analyst Peter O’Connor of broker Shaw and Partners. “I don’t think it’s over yet.”

Jacques last month apologised at an Australian senate enquiry into the destruction of the caves, saying there was no doubt the company could have made better decisions.

The blasts, which enabled Rio to access $135 million of high-grade iron ore, drew international condemnation and damaged the miner’s reputation for dealing with indigenous groups in its worldwide operations.

“What happened at Juukan was wrong and we are determined to ensure that the destruction of a heritage site of such exceptional archaeological and cultural significance never occurs again at a Rio Tinto operation,” Rio chairman Simon Thompson said on Friday.

The traditional owners of the land, the Puutu Kunti Kurrama and Pinikura (PKKP) people, said they had no comment on the executive changes, but would continue to work with Rio Tinto.

“We cannot and will not allow this type of devastation to occur ever again,” the PKKP said in a statement.

Rio said a search was already under way to replace Jacques. The board praised his leadership and pointed to his sale of the group’s coal assets, development of a climate change strategy and strong shareholder returns under his tenure.

Rio shares drifted down 0.7 per cent in Australian trade, in line with a softer broader market.

The controversy, meanwhile, has spilled over to the rest of the sector, with BHP Group and Fortescue Metals Group both pledging to review mine plans that could threaten sacred sites as they step up talks with traditional owners.

Submissions to the senate inquiry, which has been pushed out to December due to coronavirus induced travel bans, have shone a light on the power imbalances between miners and traditional owners in their agreements.

The inquiry will consider legislative changes required to prevent such incidents from recurring. Western Australian state laws that approved the destruction are also being revised.

“Traditional owners are not anti-economic development. They just want to be able to protect their most significant cultural heritage sites.” – Reuters