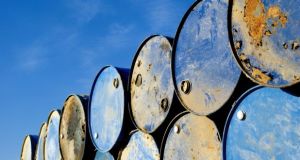 Tullow Oil shares tumbled on Wednesday after the exploration company warned of a potential cash shortfall hanging over the business as it reported a writedown-driven loss of $1.3 billion (€1.1bn) for the first half of the year.

The Irish-founded company, which has a net debt pile of $3 billion, said it was looking into “various refinancing alternatives with respect to the group’s capital structure”, and aimed to hold an investor day towards the end of the year to provide an update on plans, according to its interim report.

Tullow said the company’s scheduled repayment of $650 million of senior bonds in April 2022 could lead to a “liquidity shortfall” as its financial projections are tested next January and March for 18-month periods under the terms of its main lending facility.

In addition the group warned that in the unlikely event that it does not receive $500 million for the agreed sale of Ugandan assets by the end of this year, the company would have “zero liquidity in July 2021” as the result of a forecast maturity of $300 million of convertible bonds that month.

Meanwhile, Tullow has halted the sale of a portion of its Kenyan onshore oil fields pending a review.

The cash issues, highlighted by Tullow’s auditors EY as raising “material uncertainties” on its ability to continue as a going concern, add to the pressures on the group’s new chief executive of a little over two months Rahul Dhir, as he seeks to stabilise the business.

Last year saw Tullow shares plunge as a result of exploration and production disappointments and the exit of its then chief executive and exploration director.

“Management is undertaking a comprehensive review of each of the group’s assets to maximise their value,” the company said.

It said options to address the forecast liquidity shortfall include a refinancing of the July 2021 convertible bonds or the April 2022 senior notes, amendments to its main lending facility, or securing fresh funds from banks or “capital market investors”.

“Debt and liquidity will be a major focus in the next six months,” said Davy analyst Job Langbroek.

Shares in Tullow Oil plunged as much as 25 per cent in early trading on Wednesday, before rallying off their lows to end the session down 17.5 per cent.

The company’s financial results for the first half of the year contained few surprises, with the $1.4 billion assets writedowns that drove the loss having been flagged to the market in late July.

Tullow operational performance also showed signs of stabilisation with production for the first half of 2020 in line with expectations, averaging 77,700 barrels of oil per day.

“Despite the very tough conditions in the first half of this year we have successfully delivered reliable production and major sustainable reductions to our cost base. We are also close to completing the important sale of our interests in Uganda, ” said Mr Dhir. “The quality of Tullow’s assets remains robust.”

Mr Dhir said the company has been developing new plans for its business with the support of its joint venture partners and expert advisers. “These plans will deliver enhanced value from our assets to benefit all our stakeholders, including our host countries and investors.”