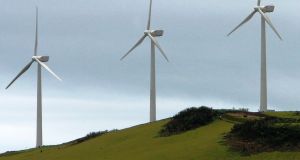 An Innogy onshore wind farm on the Galápagos islands

German energy company Innogy has entered the Irish market having acquired a wind farm site in Co Kerry for an undisclosed sum.

The 10.2MW Dromadda Beg wind farm will have three turbines, which received planning approval in May 2014. Permission was applied for by Peter and Helen O’Brien, who are directors of Glenmore Forestry Services Ltd.

Construction on the Listowel site is due to begin in September, with commissioning of each of the 144.5m turbines scheduled for the second half of 2018.

Having signalled plans to enter the Irish market when the company launched its initial public offering (IPO) in 2016, Innogy set up an Irish subsidiary in September of last year. At that time it appointed a country manager who now has four staff working with him.

“When we launched our IPO last year Innogy outlined its intention to increase its renewables footprint by entering new markets and new technologies, and the purchase of Dromadda Beg highlights our commitment to this,” its chief executive Peter Terium said. “To grow its renewables business Innogy intends to invest between €1.5 billion and €1.7 billion from 2017 to 2019.”

Cathal Hennessy, the managing director of the company’s Irish subsidiary, outlined some of the group’s Irish growth plans.

“We are also in the process of acquiring further wind projects in Ireland. We plan to grow our onshore wind business to include greenfield developments and consented sites right through to the acquisition of operational wind farms, and we are excited to play a key role in supporting Ireland to deliver its renewable energy targets.”

Innogy currently operates onshore wind farms in Germany, the UK, the Netherlands, Poland, Spain and Italy, where it serves around 23 million customers.

The Frankfurt-listed company is majority owned by German utilities giant RWE. Following Innogy’s IPO in 2016, RWE retained 75 per cent of the company, with asset management firm Blackrock the second largest shareholder with 5 per cent.

With capability to generate enough electricity to supply 3 million homes, Innogy primarily operates in the renewable energy sphere. It also retails electricity and gas in addition to managing power lines and gas lines around the world.

Details of the investment in Co Kerry comes as Greencoat UK Wind said it had acquired the Slieve Divena wind farm in Co Tyrone as part of a £105 million (€115m) deal.

The London-listed renewable infrastructure fund which invests in wind farms has entered into an agreement to purchase both the 30MW wind farm in Garvaghy, Co Tyrone, and the North Hoyle wind farm five miles offshore in Liverpool Bay from institutional investors as part of its multimillion pound portfolio expansion.

The 12-turbine Slieve Divena wind farm in Tyrone, which was commissioned in 2009, was originally developed by SSE and sold on to the Infinis group in 2011. It is estimated to produce enough electricity to power over 16,000 homes in the North.

Greencoat UK Wind expects its latest acquisition projects to complete in August 2017, and will boost its net generating capacity to 547MW.