Assets made up of four wind farms currently in operation, with fifth expected next year 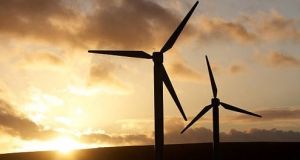 The wind energy sector in Ireland has been particularly active in the past nine months. Photograph: Getty Images

Cork-based renewable energy entrepreneur Michael Murnane and a British private equity fund have sold a majority stake in a portfolio of wind farms in Munster and Connaught, worth about €300 million, to a Japanese consortium.

Tokyo-based investment trading company Sojitz Corporation, Mitsubishi UFJ Lease & Finance and utility company Kansai Electric Power revealed on Monday that they had acquired a 60 per cent stake in the company behind the assets, which have the capacity to power about 150,000 homes.

The seller Invis Energy – set up in 2011 as a joint venture between Macroom-based Mr Murnane’s engineering and wind-energy company Craydel Group and UK private equity firm HG Capital – will retain a 40 per cent stake.

The assets being sold comprise 223 megawatts of capacity, made up of four wind farms currently in operation, with a fifth expected to be commissioned in early 2018.

The wind energy sector in Ireland has been particularly active in the past nine months. China General Nuclear Power Group bought 230 megawatts of wind farm assets from Gaelectric in December, while newly-listed Greencoat Renewables acquired a 137 megawatt portfolio earlier this year from Canada’s Brookfield Renewable Partners.

The Brookfield assets equated to about a fifth of the wind portfolio that that the firm purchased in 2014 from Bord Gáis, since renamed Ervia, under the terms of Ireland’s international bailout programme.

Greencoat Renewables floated on the Irish Stock Exchange after it raised €270 million from investors, with plans to buy further Irish assets in the largely fragmented wind energy market in the Republic.

Calls to the office of Mr Murnane’s office seeking comment on Monday were not returned.

However, it is understood that the parties behind the Invis joint venture plan to invest further in wind energy in Ireland.

“The Republic of Ireland benefits from one of the best wind resources in Europe, and onshore wind generation capacity is a vital component to ensuring energy independence and decarbonisation of the country’s electricity generation fleet,” Invis said in a statement issued in response to questions from The Irish Times on the deal.

The assets in the transaction include a wind farm in the Stack’s Mountains in Co Kerry, a project called Leitir Gungaid in Co Galway, and a development at Knockduff, Co Cork.

The deal represents the first investment in European wind energy for the three Japanese consortium members, and “is a first step towards developing a large renewable platform in a successful partnership with strong local expertise”, according to the Invis statement.

The transaction is being executed by way of the Japanese firms acquiring a 60 per cent stake in a recently-formed Irish company called Evalair Limited, which was set up to house the 223 megawatts of wind farms, according to a statement issued by Mitsubishi UFJ.

The buyers have used a London-based company, ShaMrock Wind Limited, to acquire the stake.