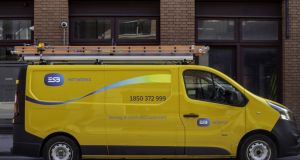 In yet another example of one part of the State shifting cash to another, Government-owned ESB plans to pay the exchequer an €88 million dividend from the €338 million profit that the electricity and natural gas supplier earned last year.

Whether it gets the dividend or not, the State has the cash anyway, either as the ESB’s shareholder or in the exchequer, so it really is a pointless exercise.

You could argue that like any commercial entity, the company should pay a dividend to its shareholders when it is prudent to do so. Many of its rivals in the energy market do the same.

Also, with or without coronavirus, the State needs money to continue running itself, to provide public services, build hospitals and homes, pay the national debt, and so on.

All that is true. However, the shareholders in ESB’s private sector competitors do not tax their customers’ incomes and profits. The ESB’s owner, the State, does tax the group’s customers, and presumably the energy group’s own profits and workers.

Another argument that might support a dividend payment to the State is that, as the ESB’s private sector rivals return cash to their owners, it would give the energy group an unfair advantage if it did not do the same.

That’s actually pretty weak. Private sector companies are not obliged to pay dividends. In fact, given the rate at which many are now suspending these payments, there are times when it is not in a company’s interest to do so.

ESB should use the €88 million to cut the prices that it charges families and employers for energy. In fairness, the company did this recently, but the cash would give it scope for more reductions.

This would leave extra money in its customers’ pockets while hopefully spurring further competition in the energy market. The State will benefit anyway as it will get a share when people and businesses spend the money saved on electricity bills elsewhere.

Otherwise, when ESB, or any State company, hands over profits earned from customers to the Government, it is double taxation, something that, as everyone knows, is doubly unfair on workers and employers.